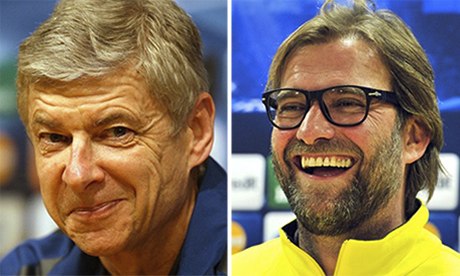 Last time when Arsenal traveled to Germany, the situation was bleak for the North Londoners. Despite winning 2-0 against Bayern Munich at the Allianz Arena, they couldn’t overturn a 3-1 deficit from their first leg Champions League round of 16 ties.

But, despite the exit, that night somehow gave birth to the seed of rejuvenation. Of course, the introduction of Mesut Ozil has been a key component in turning the vicissitudes, but with just 3 defeats in last 28 games, Arsenal are bubbling with renewed confidence while Arsene Wenger sounded upbeat, relaxed and composed, ahead of their crucial Champions League tie against Borussia Dortmund at the Signal Iduna Park tonight.

And it has a strong reason for that. His side are top of the Barclays Premier League, five points above their nearest rivals. They are heading into this match on the back a 2-0 victory over Liverpool, clearly riding with the momentum. There is a renewed belief in the camp, despite losing the last Champions League match at the hands of same opponent. Wenger said: “We play everywhere to win. That will not change and of course we will have a positive attitude in our game, in our approach.”

Dortmund under Jurgen Klopp has established itself as a major power house of Europe. They are currently lying 2nd in the Bundesliga table, one point behind Bayern. Most importantly, three teams (Napoli the other one) from this ‘group of death’ are tied on six points and therefore the game holds so much importance.

The home side will miss the services of defender Mats Hummels, while Arsenal’s previous targets – Sven Bender and Nuri Sahin – will be looking to stifle the creativity of Gunners’ enriched midfield of Ramsey, Arteta, Ozil and Cazorla.

The Gunners will be boosted by the fitness of Kieran Gibbs, the left-back has traveled with the squad after recovering from calf strain. Midfielder Mathieu Flamini is still injured while Jack Wilshere didn’t travel with the squad either.

Check out our predicted line-ups for Arsenal here.

Prediction: 1-1, The Gunners are 3/1 with Ladbrokes to earn a draw against Borussia Dortmund tonight.