Does George Boateng really have a case against Rob Styles?

Boateng’s night at the Riverside turned from heaven to gut-wrenching disappointment as he scored Boro’s second goal and then giving away a penalty for United’s second.

Boateng’s dead sure that Styles denied Boro a historic win – but when he looks back at the FA Cup quarter final, he’ll see (if he chooses to) that Boro were gifted two goals by Kuszczak (who had an excellent night otherwise), that Manchester United were denied a cast-iron penalty on Ronaldo before the second goal and that Larsson was wrongly booked for simulation. 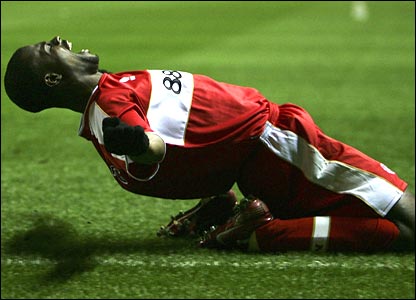 “I am devastated. I can’t believe it. The referee has robbed us.

I was not deliberately trying to handball it. The referee gave a bad decision again.”

I saw the incident again, and had two views on it (one as a neutral and the other as a cynical Manchester United fan).

View #1: Styles was wrong – the rules clearly state that handball cannot be given if a player is trying to protect himself from the ball.

View #2: If you see the replays on TV (super slow-mo), you see Boateng raising his arms up at the same time that Ferdinand bent down – Boateng made a stupid mistake and while that shouldn’t have been a penalty, Boateng was slow and should have had his head down to head the ball back out. 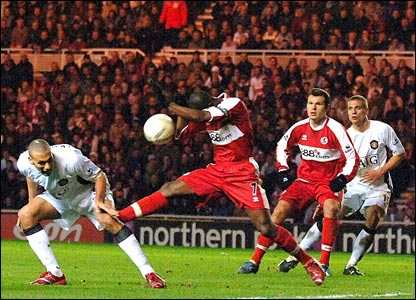 In both cases, the penalty was a wrong decision. But Styles is bound by rules – rules that state that a foul committed in the penalty area MUST be punished by a penalty kick, rules that disallow referees the benefit of video replays and rules that allow players and managers to bitch about refs but do not allow the refs to come forward and explain their decisions and admit their mistakes.

The system sucks, Boateng is ultimately wrong and now Manchester United are plotting a dream end to the season – 3 back-to-back ‘finals’ with Chelsea. The FA Cup, the Champions League and the league decider – the Stamford Bridge match between Chelsea and Manchester United that will surely be rescheduled for the last week of the season if one of the two teams make it to the FA Cup semis.

Can Manchester United do it? I think there’s a greater chance of them winning nothing than winning all 3, but it sure as hell makes for an interesting season run-in.

And Boateng? See you on the 19th mate.