In early November of this Premier League season, Sunderland caused a shock result when they defeated Manchester City 1-0 at the Stadium Of Light. City started the match at odds of 1.40 meaning the bookmakers gave them roughly a 71% chance of coming away with a victory. In their next match, City hosted Tottenham and thumped the visitors 6-0.

How often do teams respond favorably from such a surprise result? And more importantly, can we make any money out of it? To answer this question, today we will look at results from the start of the 2000/2001 season to the 10th of November 2013 for seven of Europe’s most popular leagues:

Since the beginning of the 2000/2001 football season, in our seven leagues of analysis, 4888 matches featured teams starting as favourites of 1.50 or shorter. At odds of 1.50 or shorter we can consider these clubs roughly a 67% or greater chance of winning the match. In these 4888 matches, the heavy favourites were victorious on 3724 occasions, with the match finishing a draw 762 times. 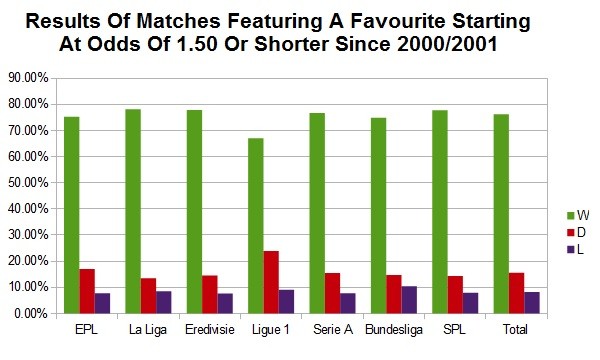 On 402 occasions however, the favourite of 1.50 or shorter lost the match, a losing percentage of just 8%.

So what happens in the following match? Do these teams bounce back? And if so, do they bounce back at a rate greater than bookmaker odds have anticipated?

Of the 402 teams that lost at odds of 1.50 or shorter, 202 managed to win the following week with 94 matches finishing in a draw and 106 of these teams losing for back to back weeks. There’s not much to take from this at least for our purposes of identify some betting value. What we are interested in is not so much how often teams have won, lost or drawn, but whether or not they have done so at a rate better than bookmaker odds.

When we look at even stakes profitability, we don’t find much to encourage us in backing teams coming off a surprise loss. By “even stakes” we mean betting a consistent unit on each possible outcome. For example, if we back the win, the draw and the loss at £1 on each occasion, which outcome will offer a profit. Further, over a large enough sample size, we can expect a return of -5% which is standard bookmaker commission. Anything performing above that is performing better than bookmaker expectations. And more importantly, anything greater than 0% is returning a profit.

The table above shows that since 2000/2001, backing teams coming off a surprise loss has performed better than backing the draw or backing them to lose again, but it has failed to record a profit.

When The Next Match Is At Home

So let’s filter our analysis and consider only teams playing at home following a surprise loss. When we do this we find very favourable results. There have been 121 matches since 2000/2001 across our seven leagues of analysis that featured a team playing at home following a surprise loss at odds of 1.50 or shorter the previous week, with these teams winning 91 matches, a winning rate of just over 75%.

But what’s important for us, is that backing such teams at even stakes across the 121 matches returned a profit of just under 20 units profit, a ROI% of just over 16%. A very handsome result.

Now, I know what many of you will be saying – it’s just a sample size of 121 matches.

Yes. While the statistical significance of this sample is not tremendous and such results could indeed be the result of mere good fortune, what does offer food for thought is the consistency of the trend. All but one of our leagues of study recorded a profit for teams in such a situation playing at home following a loss at odds of 1.50 or shorter. That league was Ligue 1, which returned a loss 1.66 units at even stakes backing such teams, however that itself was over a sample size of just 6 matches. Every other league in our analysis returned a profit for these teams, with the Premier League delivering the greatest profit, just over +33% ROI across 28 matches played.

So What To Do

Following such trends blindly is never a good idea, especially over limited sample sizes. However what we have identified here is a market bias against home teams coming off losses at short odds. Coming off such a surprise loss, the market has appeared to underestimate these club’s ability to respond at home in their next match. Rather than take a broader longer term view, punters have perhaps been a touch shaken by the previous week’s result and have been hesitant to lump on these teams again the following week.

While we would like to see a greater sample of results, keep this market trend in mind next time there’s a surprise result.