The injury to Olivier Giroud has disrupted Arsenal’s transfer plans to a certain extent. Arsene Wenger was happy with the current crop of strikers he has at disposal, but the Frenchman’s injury has forced him to look for options elsewhere.

Italian website Calciomercato couple of days ago claimed that the Gunners had enquired about the availability of Roma striker Mattia Destro, who is also a reported target of Chelsea. 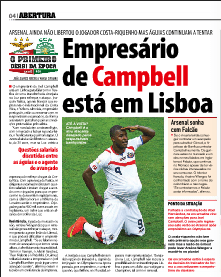 Also, Italian and French media have linked the Gunners with a lone move for Radamel Falcao, who is again wanted by Real Madrid and Juventus.

With only two days remaining for the transfer window to shut, Wenger can hardly afford to lose any current striker from his squad. Portugal media have been reporting for the last few days that Benfica are keen to sign Arsenal’s highly rated young striker Joel Campbell, but they feel Wenger may be reluctant to sell him.

The Costa Rican impressed during the World Cup in Brazil and expects to impress Wenger this season in Arsenal colour. There were even suggestions that should Arsenal be able to land any good striker, they might allow Campbell to join the Eagles.

Portugal newspaper Record claim today that Campbell’s agent was in Lisbon yesterday to hold talks with Benfica. The report further add that Benfica will find hard to secure a loan deal at the moment as Wenger might be tempted to keep him.

It’s a strange piece of news to say the least; it says they are speaking to see the conditions the player would want in a potential move!