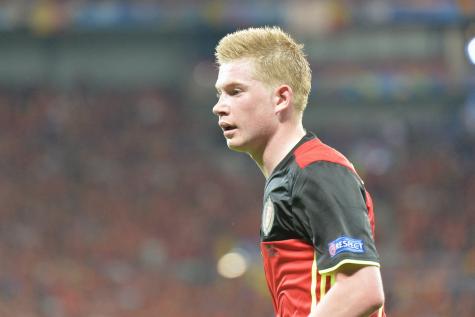 Belgium meet Hungary in a second round tie at Euro 2016 on the top half of the draw which is considered very favourable for the eight nations on this side.

Marc Wilmots’ side are favourites to reach the final with previous World Cup and Euros winners all in the opposite half.  Croatia are widely considered the only threat to the Belgians.

First of all they need to beat a Hungary side who went unbeaten in winning Group F which included a 3-3 draw with Portugal in their latest match.

Belgium headed to France as one of the bookmakers’ favourites (13/20 with Ladbrokes to win) before being widely written off after a 2-0 defeat to Italy in their opening group match.  Toby Alderweireld failed to cut out Leonardo Bonucci’s ball from the halfway line which setup the opening goal.  One has to wonder if Italy would have been able to break Belgium down but for that goal.

Hungary caused the biggest surprise of the first round of games when they beat Austria 2-0.  Afterwards they did rely on an 88th minute own goal to rescue a point versus Iceland before taking the lead three times against Portugal before settling for a point that was enough to win the group.  It means Hungary are winless in two whilst Belgium have won their last two.

Conceding four goals in the group and looking suspect at times defensively does not bode well for a match against this Belgium side that boasts a wealth of talent going forward.  Eden Hazard and Kevin De Bruyne have the ability alone to hurt Hungary in both open play and from set pieces.  Goalkeeper Gábor Király is certainly suspect from set pieces.

Belgium have a wealth of talent throughout their squad.  Supporting the pacey Yannick Carrasco down the right wing is attacking full-back Thomas Meunier, whilst centre midfielders Axel Witsel and Mousa Dembélé both support the attacks.  Witsel scored against the Republic of Ireland.  Question marks are continually asked of Romelu Lukaku up front but we believe he has the ability to hurt Hungary on Sunday.

Balázs Dzsudzsák was aided by two deflections to score his score his brace versus Portugal.  Despite scoring five goals in the group it’s hard to see what advantage this Hungary team holds in attack versus a Belgium side that kept back-to-back clean sheets to end the group.

Aside from Dzsudzsák, László Kleinheisler is the only creative player Hungary have going forward and they really need a lot more than that.  Zoltán Gera and Ádám Nagy have both been solid for Hungary in the centre of midfield; the latter will be fresh having been rested in their final group game.

This is a great opportunity for Hungary to put some fear into the rest of the field and record a big victory ahead of a potential match versus Wales or Northern Ireland in the quarter-finals.

Hungary are 6/1 to beat Belgium on Sunday.

Romelu Lukaku is 10/3 with Ladbrokes to score the opening goal of the match.

2 – Belgium are on a two-game winning streak for the first time at a European Championship.

2 – Belgium have won two games at a European Championship for the first time in their history.

40 – Every game Gábor Király plays at Euro 2016 extends his record as the oldest player every to appear at a European Championship finals.