“A squad that will be once again feared across Europe” is what Luca Toni and Franck Ribery signed up for next season. Those are believed to be Bayern general manager Uli Hoeness’s words to Toni.

With most of my favorite team’s (Man Utd) transfers done already I have decided to turn my attention and track the market activity of the only other team that has fans in our family.

FC Bayern have had their worst season in 10 years and with their quasi-moronic habit of letting players leave on free (and then trying to make up for it by asking ridiculous money for players like Hargreaves) they have found themselves almost in need of an entire new squad for next season.

In addition to Mehmet Scholl who is retiring and Owen Hargreaves who completed his much anticipated and craved transfer to Manchester United. Bayern also bade farewell to Hasan Salihamidzic, Claudio Pizarro and Ali Karimi. All three players will be leaving the Bavarians on free, the destination of the first two being Juventus and Chelsea respectively while that of Karimi is still to be determined (most likely being a Qatari club).

All of this meant the club had to go on its biggest spending spree in history. â‚¬11m for the world cup winning striker offering him a record shattering contract of â‚¬5.5m a year, Toni has promised Bayern to “repay them in goals”. As for Ribery, the transfer details have not been disclosed but the reports have then at an initial â‚¬26m in addition to another 4m when the Bavarians qualify for Europe, making it the most expensive acquisition in Bundesliga history.

While many Arsenal fans thought the Frenchman was Emirates bound because they had Henry and many Real Madrid fans though the same because of his relationship with Zidane, it appears that Bayern stalwart Willy Sagnol was able to convince his countryman that German was not so hard to learn. Ribery will take the number seven previously worn with distinction by Mehmet Scholl, with Toni set to wear the classic number nine last occupied by goalscoring legend Giovane Elber. 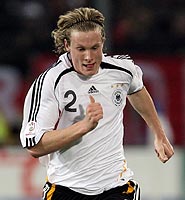 Also, Miroslav Klose has stated that he wishes to play for Bayern in 2008, although it is uncertain if Bayern will agree with Werder Bremen on a price-tag for the world cup sensation. Still, Klose is definetly Allianz-Arena bound at the end of his contract next year. These have been the names and deals so far, and I don’t doubt that Ottmar Hitzfeild, Uli Hoeness, and Der Kaiser (Franz Beckenbauer) have more tricks up their sleeves.

This revamped squad has started to take shape; it indeed looks like a well oiled German machine ready to instill fear into the hearts of the weak and by weak I mean the opposition Bayern will face in the UEFA Cup. I have no doubt in my mind Bayern will sweep through the UEFA Cup and come back to the Champion’s League hungrier than ever.