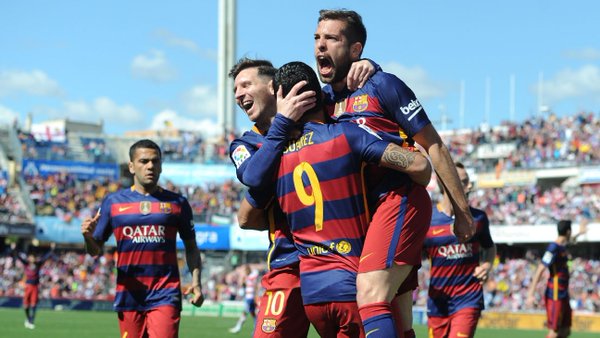 Just one point separated Barcelona and Real Madrid at the top of the La Liga table after 37 rounds of action as they took the field for the last league match of the season for the decision of where the title would go. While Real Madrid started the goalscoring earlier at Estadio Municipal de Riazor against Deportivo La Coruna, with Ronaldo getting an early goal, a win for Barcelona, against Granada would secure them the title, and only if they slipped would Real Madrid’s win have done any damage. Barcelona didn’t falter.

Luis Suarez scored a hat-trick to end the league with 40 goals and wrapped up the title as well as become the first player other than Messi or Ronaldo to win the La Liga golden boot since 2008-09.

Real Madrid won against Depor 2-0, but their efforts went in vain as Barcelona finished the title with 91 points, one clear of Real Madrid.

After finishing last season with a treble, much was expected from Barcelona this season. Although they crashed out of the Champions League after losing to Atletico Madrid, the Catalans made sure the same couldn’t be said about the La Liga, despite a underwhelming patch in the middle.

This is the 24th title for Barcelona.