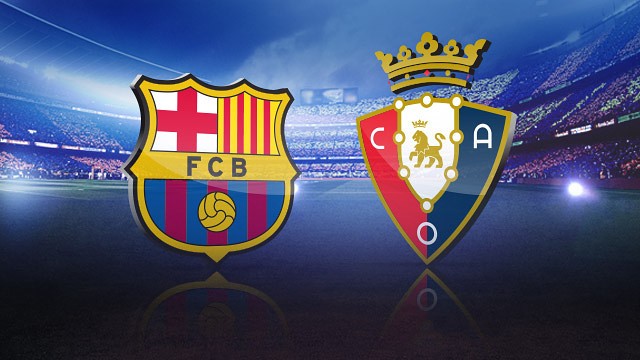 Barcelona host Osasuna in La Liga this week and the Catalan giants will look to kick on after their derby win against Real Madrid.

The title race is wide open right now and Barcelona will need to make full use of their momentum and win their remaining matches.

Luis Enrique’s men have been quite poor at the back lately and they will need to improve here.

Vidal, Rafinha, Neymar and Mathieu are the only absentees for the home side.

Osasuna are in impressive form right now and they will be looking to pull off an upset this week. The away side have lost just one of their last four La Liga matches, winning twice and drawing once.

Osasuna are plagued with injuries right now and will be without the services of Digard, Flano, Tano, U. Garcia, Riviere, J. Flano, Riera, Loe, D. Garcia and Vujadinovic.

Barcelona have won their last 9 home matches in La Liga.

Barcelona have scored at least 3 goals in 8 of their last 9 home matches in La Liga.

Barcelona have won 10 of their last 12 matches against Osasuna in all competitions.

Osasuna have failed to win 23 of their last 25 matches in La Liga.

Osasuna have conceded at least 2 goals in 6 of their last 7 away matches in La Liga.

Barcelona have conceded at least 2 goals in their last 3 matches in La Liga.

Barcelona have been winning at both half time and full time in their last 5 home matches against Osasuna in all competitions. Bet on the home side to win both halves.

Barcelona have scored at least 4 goals in their last 4 home matches against Osasuna in all competitions. Over 2.5 goals seem likely.

Barcelona have kept a clean sheet in 5 of their last 6 home matches against Osasuna in all competitions. Bet on the home side to keep a clean sheet.

This should be a routine win for the home side. They are far superior in terms of personnel and form. The El Clasico win will have given them immense confidence and they are likely to punish a mediocre Osasuna side this week.