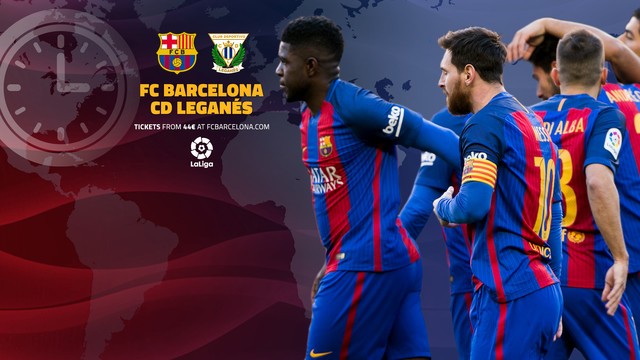 Barcelona will be looking to close the gap with bitter rivals Real Madrid with a win over Leganes this weekend.

The Spanish champions are heading into this game on the back of four wins and a draw in their last five league games. Luis Enrique’s men will be looking to get over their Champions League disappointment with a big win here.

The last time these two sides met, Barcelona picked up a thumping 5-1 win away from home.

The home side will without Neymar, Turan, Mascherano, Rafinha and Vidal due to injury. Sergio Busquets is suspended for one match and will miss out as well.

Leganes will be dreading their trip to Camp Nou this weekend.

The last time these two sides met, Leganes were thrashed in front of their own fans. And this time, they are heading into this game on the back of three consecutive losses.

Leganes are in terrible form right now and have won just 4 of their last 22 league games. The last time they won a match in all competitions was in November 2016.

They will be without the services of Ibanez, Kone, Serantes, Timor and Perez for this game.

Barcelona are undefeated in their last 15 matches in La Liga.

Barcelona have won with at least a 3 goal margin in their last 3 home matches in La Liga.

Leganes have failed to score in 5 of their last 7 away matches in La Liga.

Leganes have failed to win their last 10 matches in La Liga.

Leganes have conceded at least 2 goals in 6 of their last 7 away matches in La Liga.

Barcelona have been winning at both half time and full time in 5 of their last 7 matches in La Liga. Get Barcelona to win both halves here.

There have been over 2.5 goals scored in Barcelona’s last 3 home games in La Liga. A high scoring game is definitely on the cards here.

Barcelona have kept a clean sheet in 5 of their last 7 home matches in La Liga. Bet on the home side to keep a clean sheet against Leganes.

Barcelona are in very good form in La Liga and their loss against PSG will only motivate them to improve.

On top of that, Leganes are in dreadful form. They are struggling in every department and are likely to be on the receiving end of another thrashing here.

A home win seems quite certain this weekend.