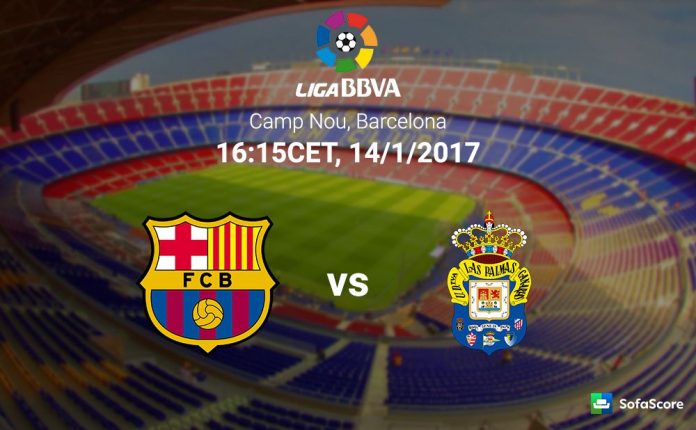 Barcelona host Las Palmas in La Liga later today and the Catalan giants will be hoping to get their season back on track.

The Spanish champions have won just one of their last three games at home in La Liga and are in deep trouble as far as the title race is considered. They are already five points behind Real Madrid and cannot afford any more slip-ups if they want to stay in the hunt.

Luis Enrique has a fully fit squad to choose from for Saturday’s clash.

Las Palmas will be dreading their trip to Camp Nou this weekend.

They have a very poor away record and have won just one of their last 11 away games in the Spanish top-flight.

However, they managed to beat Atletico Madrid in the Copa Del Rey earlier this week and will fancy their chances of an upset today. Barcelona have been quite inconsistent so far and Las Palmas will look to make the most of it.

The away side will be without Pedro Bigas, who is ruled out with a knee injury.

Barcelona are undefeated in their last 10 matches in La Liga.

Las Palmas have failed to win their last 7 away matches in La Liga.

Barcelona are undefeated in their last 6 matches against Las Palmas in all competitions.

Barcelona have a good record against Las Palmas and will be determined to get a win here. Bet on the home side to win.

There have been 8 goals scored in the last 3 meetings between these two sides. Over 2.5 goals seem likely.

Despite their inconsistent performances this season, Barcelona remain firm favourites to win this one.

They are far superior to Las Palmas and should be able to pick up an easy win at home. The away side have struggled on their travels and will be lacking in confidence.