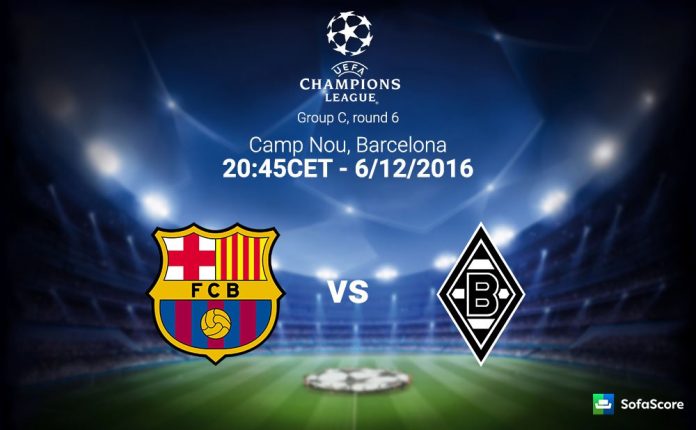 Barcelona host Borussia M.Gladbach in the Champions League this midweek.

The Spanish champions have already won their group and might look to rest some of their key players for this one. However, there is no doubt that Luis Enrique will want to win their final game. The last meeting between the two sides was a close one, and the home side will need to be careful in order to avoid an upset.

Barcelona have been quite inconsistent in La Liga so far and will be hoping to make amends in Europe. They were held to a 1-1 draw against Real Madrid on Saturday. The home side will be without some of their key players for tomorrow’s clash. Neymar and Ivan Rakitić are both suspended, and Jeremy Mathieu is ruled out through injury.

The Bundesliga outfit are third in their group and will need to pick up a big win over Barcelona in order to finish in the top two. Manchester City are three points ahead of them and have superior goal difference, as well.

Gladbach have been atrocious away from home, and tomorrow’s game will be a massive challenge for them. However, they have shown that they can be quite competitive at times. They were impressive in their 2-1 loss against Barcelona earlier this season and in the 1-1 draw against City.

The away side will have a massive challenge ahead of them, and the major worry for them will be the absence of a few key players. Lars Stindl is suspended and the likes of Alvaro Dominguez, Mamdou Doucoure and Patrick Herrmann are all sidelined with injuries. Marvin Schulz and Ibrahima Traore are doubtful and will be assessed closer to kick-off.

Barcelona have won 21 of their last 26 matches in the UEFA Champions League.

Barcelona have scored at least 2 goals in 22 of their last 27 matches in the UEFA Champions League.

Borussia M.Gladbach have failed to win any of their last seven competitive outings.

Barcelona have been scoring freely in the Champions League so far. Over 2.5 goals (4/9) seem likely here.

Gladbach are in a crisis right now and will struggle to contain Barcelona. Get the Catalan giants to win at 4/11.

Barcelona are far superior in terms of quality and recent form. Gladbach are in very poor form and are lacking in confidence. This should be a routine victory for the home side. Barcelona will look to finish off their group stage with a big win.