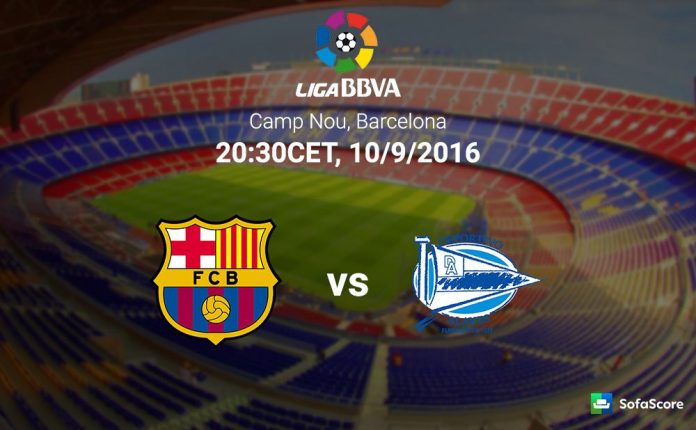 Barcelona will look to continue their excellent start to the season with a win when they take on Alaves later today.

The Spanish champions have won all of their matches (in all competitions) so far and have managed to score 12 goals in four games already.

Luis Enrique’s side have comfortably beaten the likes of Betis, Bilbao and Sevilla so far and Alaves should not prove to be too much of a challenge for them.

Luis Suarez and Lionel Messi are in red hot form right now and will cause all kinds of problems for the visitors.

Andres Iniesta and Andre Gomes are both doubts for today’s game and new signing Denis Suarez is expected to replace them in the midfield three.

Lionel Messi is fit for the game despite having a groin injury earlier this week.

Brazilian forward Neymar is still recovering from the exertions of the Olympics and will start later this month.

Alaves have had a decent start to their La Liga campaign so far.

Despite failing to pick up a single win in their first two matches, they are unbeaten and have been quite impressive against La Liga giants such as Atletico Madrid.

Defensively they have been well organised and the likes of Gijon and Atletico struggled to break them down.

However, they will be aware of Barcelona’s quality and will need to improve on their performances if they want to extend their unbeaten run this weekend.

The only injury issue for Alaves is Zouhair Feddal. The defender is still a doubt and Victor Laguardia will continue at centre-back.

Barcelona have won 29 of their last 34 home matches (La Liga).

Barcelona have scored at least 4 goals in their last 3 home matches (La Liga).

Barcelona have kept a clean sheet in 6 of their last 7 matches (La Liga).

Barcelona are in supreme form right now and are firm favourites to win this one. They are 1/12 to win this game with Ladbrokes.

Considering Alaves’ form in front of the goal and Barcelona’s defensive record against them, a home win with a clean sheet seems like a good bet. Barcelona are 8/13 with Ladbrokes to win to nil.

Barcelona are in red-hot form in front of the goal and over 2.5 goals (1/4 with Ladbrokes) seem likely.

Despite their impressive defensive performances so far, Alaves will have a tough time at Camp Nou later today.

They will be up against the best attack in the whole of Europe and are simply not good enough to cope.