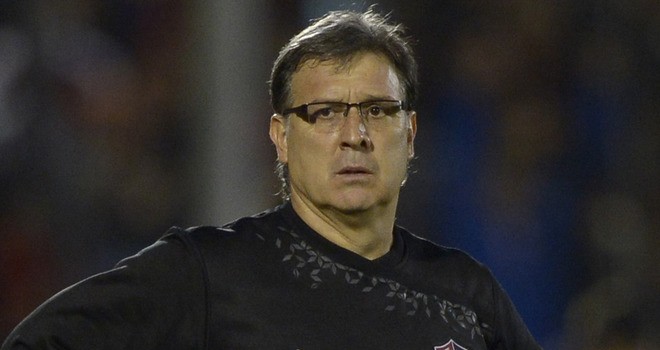 ‘FC Barcelona have reached an agreement to appoint Gerardo Martino as the new coach of the football team for the next two seasons. This agreement is pending the drafting and signing of the contract.’ – Official statement from Barcelona.

The 50-year old signed a two-year deal with the Catalan giants. Nicknamed ‘Tata’ by many, Martino spoke with Barcelona’s representatives following the resignation of Tito Vilanova last week. The two parties came to an agreement, and the Argentine will bring his backroom staff (Elvio Paolorroso and Jorge Pautasso) with him.

‘I like Tata Martino. He is a great coach. He gets his teams playing well and we all respect him.’ – Barcelona forward Lionel Messi.

Last season, the former Paraguay manager won the Primera Division with Newell’s Old Boys. He has won three league titles with former side Libertad, one title with Cerro Porteno, and was even named coach of the year (2007) while manager of the Paraguayan national team.

He will be Barcelona’s third manager in as many years, after Tito Vilanova, who had succeeded Pep Guardiola, only spent a season as manager of the La Liga side, as he was forced to step down due to health problems.

‘We know about his career, he is a very good coach. He likes Barcelona’s playing style.’ – Barcelona captain Carles Puyol.

A number of names were linked alongside Martino – Barcelona B team manager and former player Luis Enrique, Ajax boss Frank De Boer, Barcelona’s assistant Jordi Roura, and even Premier League managers Andres Villas-Boas (Tottenham) and Michael Laudrup (Swansea) were said to be among the favourites.

His new employees have been very complimentary to their new manager – who has been likened to Athletico Bilbao boss Marcelo Bielsa. He takes charge of a side enjoying their most successful spell as a club, and a side keen to reclaim the Champions League crown back after falling short in the last two seasons.