Yesterday it was confirmed by FIFA that Barcelona won’t be allowed to sign any players in the next two transfer windows, although the Catalan club are likely to appeal to the Court of Arbitration for Sport to change the verdict.

Barcelona have splashed money this summer to sign top players like Luis Suarez, Thomas Vermaelen, Ivan Rakitic et al, but they may need to delve into the transfer market again. There is a genuine possibility that FIFA may not change their decision and in such a scenario, Barcelona will be the worst sufferer. 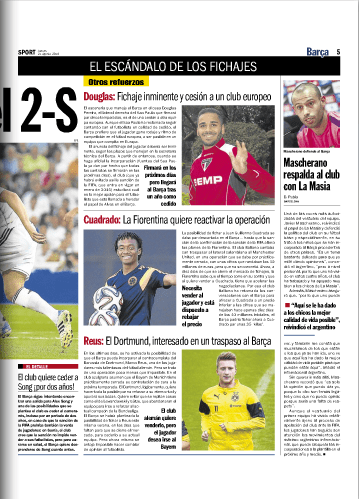 According to reports from Catalan newspaper Sport, Barcelona will attempt to land at least two of their major targets – Juan Cuadrado and Marco Reus.

German giants Borussia Dortmund want to sell Reus to Barca in order to avoid losing him to rivals Bayern Munich but Catalan press fears that the player already has a deal with the Bundesliga champions.

There is however hope that Barcelona might sign Juan Cuadrado before the transfer window closes. Sport reckons Fiorentina might be willing to sell him to Barca for €35m now in order to ensure profit.

If the reports are to be believed, Manchester United have already agreed a personal deal for Cuadrado but it is their indecisiveness (point the gun towards CEO) that could see them miss out on such a talented young footballer.

Likewise, Reus is a world class footballer and Manchester United had been targeting him since last year. The Times journalist James Ducker claimed last year that United were planning to sign Reus and could involve Kagawa as a part of the deal.

The interest seems fading away with recent reports suggested that Reus had rejected an offer from United. Reus has rejected contract extension at Dortmund as a result of which, he will now able to leave Jurgen Klopp’s side for €35m, his release clause, that can be trigged from 2015.