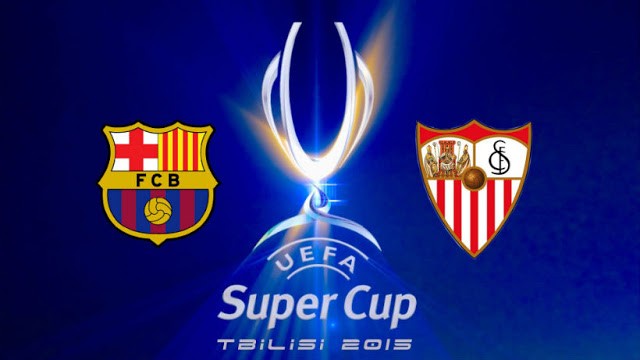 For a second season in a row the UEFA Super Cup will be contested between two Spanish La Liga sides.

Treble-winning Barcelona face Europa League winners Sevilla in Tbilisi, Georgia on Tuesday. If you’re betting on the game, you can get 3/1 odds on Barcelona beating Sevilla through Favourit’s enhanced odds special offer here.

Barcelona are aiming for six trophies this season and quite frankly we wouldn’t past them – this team has the making of one of the best teams in the history of football and the front three could already be called that.

Lionel Messi, the greatest player ever, teamed up with Luis Suarez and Neymar crushed teams in the second half of last season when they started clicking – running away with the Spanish league title, as well as comfortably winning the Champions League (thrashing Paris Saint-Germain and Bayern Munich on their way to beating Juventus 3-1 in the final).

Though Pedro could be on his way to Manchester United in the coming days, if they keep their front three fit all season it shouldn’t be a huge blow. They also have some youngsters coming through in attack.

Claudio Bravo was the number one last season and he still has Marc-Andre ter Stegen waiting in his footsteps. One weakness in this Barcelona team is their defence. For those couple of minutes in a game when they are out of possession they don’t always look secure.
Jordi Alba is often out of possession but sometimes gets away with it with his blistering pace. Likewise Dani Alves at right-back. Thomas Vermaelen has been injured for a year – will he come back to his best this season?

Can Sevilla handle such a talented team on Tuesday? We’re not so sure. Luis Enrique seems like the kind of guy who wants to win every trophy at any cost, and break records for the sake of breaking them?

There were 18 points between these two last season, with Barcelona winning 5-1 at Camp Nou early in the season before drawing 2-2 in the away fixture which took place four days before the first leg of the Champions League quarter-final in Paris.

On paper and based on last season’s results, they are still no match for Barcelona. Granted, Lionel Messi and Neymar are doubts having participated in the Copa America earlier this summer. But with Luis Suarez, Pedro, Andres Iniesta, Ivan Rakitic and co, they are still heavy favourites to get the job done. 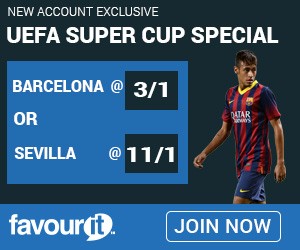 Despite the unpredictable nature of knockout football, Barcelona are overwhelming favourites for this game and you can’t find good odds on a Barcelona win anywhere.

That’s why Favourit’s enhanced odds special offer on Barcelona is so tempting. Barcelona are 3/1 to beat Sevilla with Favourit, and if you fancy an upset then Sevilla are a mouth-watering 11/1 to beat Barcelona.

Favourit’s enhanced odds special offer is available for new customers only, with the promo stake limited 10 GBP / EUR. The offer ends an on 11th August 2015 18:45 BST, so make sure you take advantage of it right away.