With Ronaldinho “injured”, the Barcelona fans bowed last night before a new idol, the brilliant Argentinian Lionel Messi. Yes, FC Barcelona’s very own Messiah (El Mes(s)Ã­as, as they call him here in Barcelona), came to the rescue as Barcelona defeated Sevilla 2-1 at the Camp Nou in a game which never quite lived up to its billing.

The first half was a fairly insipid, tactical affair. Juande Ramos’ extremely organized Sevilla outfit set out their stock to stifle the azulgrana creativity and to build up the tension at the Camp Nou, on the occasion in which the famous stadium celebrates its 50th anniversary (the actual anniversary is on the 24th, but festivities were held in order to coincide with the game and the announcement of the reformation of the Camp Nou under the direction of English architect Norman Foster). 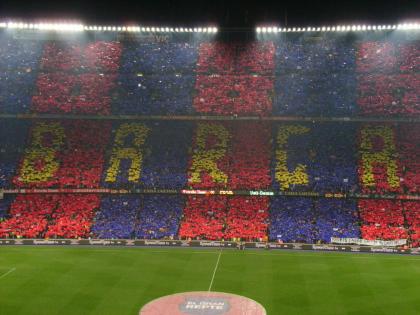 And, with their 4-5-1 formation, in which Poulsen and especially Keita excelled, the Sevilla midfield effectively pressured Xavi out of the game, a move which was effective until the Barcelona captain’s withdrawal in the second half. The first fourty-five minutes offered up precious few chances, although a dazzling counter-attack from the UEFA Cup holders saw Adriano crash an excellent header onto the outside of the post. It was a warning of what was to come, one might have thought — but such a risk never materialized, and Sevilla had just one shot at goal over the entire fourty-five minutes. With Henry off-colour, Barcelona’s best players were Iniesta and Messi, although they were restricted by Sevilla’s pressurizing to long-range shots, the pick of the bunch a firm drive from Eric Abidal, who offered another assured performance at left-back.

Whilst there were no changes in personnel for Barcelona, the second half soon became a vastly different affair. Poulsen and Keita continued to press but their obvious tiredness left more space for the Barcelona midfield to exploit, especially when Iniesta dropped back to midfield to accommodate the arrival of Giovani Dos Santos, a replacement for the disappointing Xavi. Although the first ten minutes continued to offer up little in terms of clear chances, the Barcelona fans began to sense a sea-change in terms of attacking penetration, with Henry and Messi in particular starting to breach the impressive Sevilla defence. Indeed, the Frenchman showed his quality when latching onto a lobbed pass, sublimely controlling it twice in the air before his early-struck curled shot deceived Palop, whose slight touch managed to divert the effort agonizingly onto the post.

Sevilla continued to offer little in terms of attacking efforts, and Henry’s influence continued to increase. In the seventy-third minute, the much-craved goal arrived. Henry curled a lovely ball to Messi around the six yard box and the Argentine expertly chip-controlled the ball with the outside of his boot before acrobatically volleying it into the bottom corner, leaving the Sevilla goalkeeper Andrés Palop with no chance whatsoever. Interestingly, Messi chose to celebrate by doing the Ronaldinho movement with his hands, a gesture of solidarity which will not have gone unnoticed by the great but beleaguered Brazilian.

At this point, Juande Ramos sent on Alexander Kerzakhov for the disappointing Jesús Navas, the Russian scorer of three league goals so far this season. However, the action continued to come at the other end as an Arsenal-style counter attack, led by Titi Henry, culminated in an excellent run from Gio dos Santos, whose cross to Messi was turned away for a corner. However, from the resulting corner, a crude foul by Poulsen — no stranger to Hierro-style manhandling, and well-known for his aggression — on the Brazilian, gave Lionel Messi the chance to extend Barça’s lead from the spot. Messi coolly obliged, and the match seemed effectively over, the only question being whether Dos Santos, Henry or Bojan (on for Messi in the 89th minute) would manage to score a goal on this momentous occasion.

However, Sevilla are not double UEFA Cup winners for nothing, and the Andalucians gave their all to get back into the match. After a long throw was nodded on by Kanoute, Sevilla fans were in ecstasy as Kerzakhov lashed an excellent drive into the bottom corner. However, this jubilation soon turned to disbelief as the goal was disallowed due to an apparent foul by Kanoute on his marker, even though replays showed no infringement whatsoever by the Mali striker (get ready for the conspiracy theories, especially in Marca!).

This decision would have Sevilla fans fuming, especially when Kanoute reduced the arrears in the 92nd minute with a superbly taken goal, lifting the ball delicately over the advancing VÃ­ctor Váldez. However, it was not to be, and, watched by a demonstrably anxious Frank Rijkaard, as well as an array of former starts, Barcelona held on for the win, which lifts the Catalan giants, for the moment, into second place behind their arch-rivals Real Madrid.

After a first half which left much to be desired — although we can say in Sevilla’s defence that their defensive work was formidable, and that Poulsen and Keita worked tirelessly to keep Barcelona at bay — the improved second-half performance will have come as a relief to Barça fans, although their game continues to lack the fluency of the truly great Barcelona teams, and the club continues to rely too much on Lionel Messi, who was again pretty much unplayable.

On the positive side, the defence looks fairly solid, with the sloppy defending towards the end of the match probably owing more to relief and complacency than a lack in defensive strength. Yaya Toure again had a good game in central midfield, as did Iniesta down the left and down the middle, whilst Thierry Henry certainly grew into the game.

As for Sevilla, the club had little to shout about until the last few minutes of the match, though they demonstrated once more just how well organized and hard-working a team they are. However, no team has kept a shut-out against Barcelona since Espanyol did so on the 1st of March 2005, and the more they pressed and Messi grew into the game, the less likely it looked to happen.