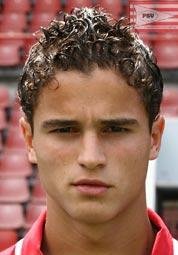 Ibrahim Afellay, the Dutch winger playing for PSV Eindhoven has been announced as the next signing of Barcelona when the transfer window opens. Barca’s website announced the deal late last night. Personal terms are still to be agreed between the club and the player.

The 24 year old winger will be joining the club in the January transfer window. The reported fee is said to be around €3m.

Afellay is of Moroccan decent but he chose to play for the Netherlands despite the heavy competition for places in midfield. He made his international debut in a Euro 2008 qualifier against Slovenia in March 2007. He was also a part of the Dutch squad for the Euro 2008 and the World Cup 2010.

He had only managed to score two international goals both against Sweden. For his club, PSV, he had scored 34 goals in over 150 appearances.

He has played more than 23 games a season in each of his last five seasons at PSV and has medals in the Dutch Cup and Super Cup, four League titles as well as UEFA Champions League and Europa League experience.

Speaking to El Mundo Deportivo, Afellay said about the transfer:

“Barcelona are fantastic, a great club and a great team. No player would say no to Barcelona.”

He spoke further to the Catalan based newspaper Sport and said:

“I’ve never been to the Nou Camp, neither as a fan or as a player and it’s a dream for me to play there, I’m very eager to make my debut at the Nou Camp.

“I really enjoy watching Barca on TV. Everybody does because they play very attractive football and are very nice to watch.”

He will have tough competition in midfield where his teammates will be the World Cup winning trio Xavi, Andres Iniesta and Sergio Busquets in midfield and Pedro, Bojan and David Villa up front. Not to forget Lionel Messi. Afellay, however, said:

“The truth is that I don’t mind where I play, if it’s in the centre of the pitch, in attack or on the wing. I will play where the coach needs me.”

“The Dutch team plays a bit like Barcelona and Afellay knows how a good 4-3-3 system works. With Lionel Messi, Xavi and the other Barcelona players Afellay will easily adapt to that team.”