According to Spanish daily, Marca, Athletic Bilbao are set to offer €8m for Nacho Monreal. 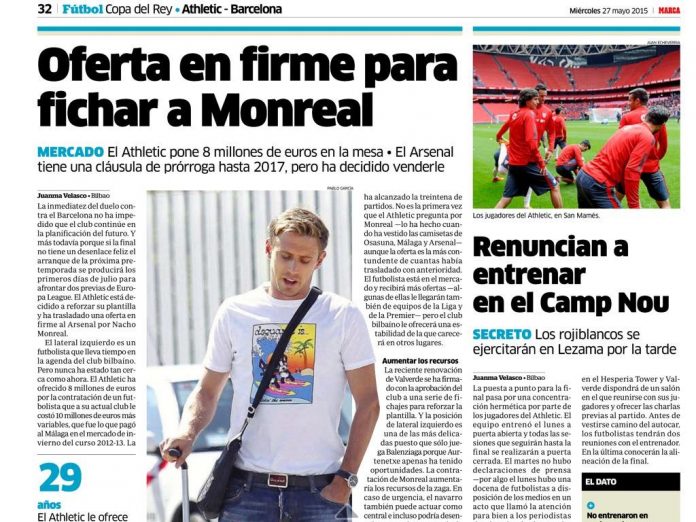 The Spanish full back has been in and out of the side since his arrival from Malaga and would be keen on a return to Spain this summer.

Bilbao are thought to have identified the left back position as priority in terms of transfers and Monreal is an ideal candidate. Due to self imposed restrictions, Bilbao are only allowed to sign players of the Basque heritage and therefore Monreal makes perfect sense.

Arsenal will be keen to sign a new left back should Monreal depart. The Spanish defender has been a solid defensive presence for the Gunners and has been a valuable part of the squad, especially because of the injury prone Kieran Gibbs.

Monreal will be a cheap acquisition for Bilbao, who will relish the chance to strengthen their ranks with a homegrown player with plenty of experience and quality.

Marca have stated that Monreal is aware of Bilbao’ interest and will take his time to consider their offer. It is believed that the player holds the key to the transfer and that Arsenal will not stand in his way.

Arsene Wenger blocked Monreal’ move to Bilbao last summer, but it is believed that he might be willing to accept an offer this time.

Left back is not a position that needs immediate attention as far as Arsenal are concered. But if Monreal departs, the London club will need to add a wing back.

Wolfsburg full back Ricardo Rodriguez has been linked with the move to the Premier League after a spectacular World Cup and Bundesliga season. Could he be the man to replace Monreal at Arsenal?