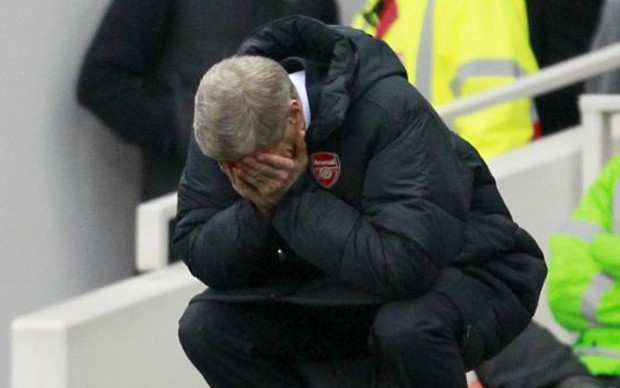 Following Arsenal’s 1-3 loss at the hands of Monaco in first leg of the round of 16 in the Champions League, Arsene Wenger has blasted his side’s weak mentality and abysmal defending. Conceding three away goals will thus put the Gunners on the brink of elimination by the hands of the French side.

It was a night to forget for the London side, with Olivier Giroud in particular who was profligate in front of goal. Per Mertesacker also had a nightmare as he was found wanting every time the French side hit the back of the net.

Wenger who was visibly upset later said, “Congratulations to Monaco, they had a perfect result and played the game they wanted to play. On our side, I believe that we missed the chances and we were a bit suicidal defensively.”

“It looks like we have lost our nerve and our rationality on the pitch. The heart took over the head and at that level it doesn’t work. Our weakness was more down to mentality.”

“We rushed our game, we knew coming back at half-time it was important not to concede a second goal and we were too impatient. Mentally we were not ready or sharp enough to get into this game. We paid for it.”

The result comes as a hammer blow for Arsenal who had got a ‘favourable’ draw in the first knockout stages in the Champions League. Over the years Wenger could have claimed that when you lost to the best, the sides like Bayern Munich or Barcelona, recrimination is a graceless irrelevance. But calling your team mentally weak seems Wenger has lost the plot.