Catalan newspaper ‘Sport’ has a front page story on Barcelona forward Pedro Rodriguez. Inside the headline reads ‘Pedro se resigna y dira ‘si’ al Chelsea’ which roughly translates to ‘Pedro has resigned to not being a key player at Barcelona and has said ‘yes’ to join Chelsea’.

The inside story is slightly different. There has not been any formal offer yet from Chelsea. Neither Pedro has accepted any offer from the Blues. The suggestion is, Chelsea will lodge a bid in the region of €30m, which is his release clause (dropped down from €150m) and Pedro will gleefully accept that offer. 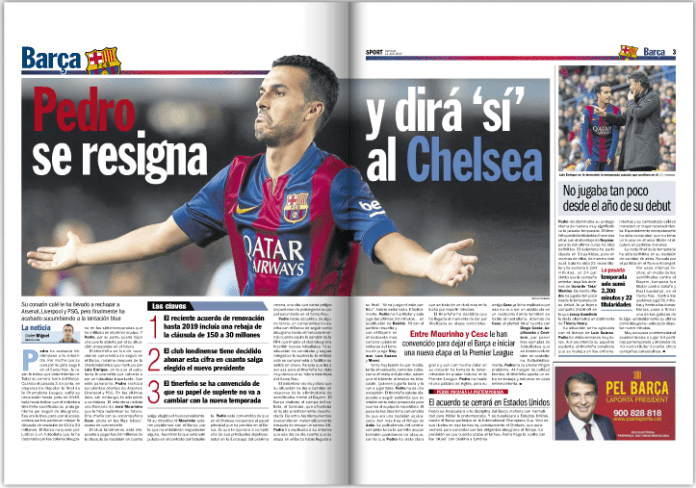 Pedro has been at Barcelona throughout his career and won five La Liga and three Champions League titles in his seven seasons at the club.

However, he found it difficult to break into the first team, as Luis Enrique favoured the trio of Suarez-Messi and Neymar upfront. He is also expected to drop down the pecking orders at the club, following the arrival of Arda Turan, who joined from Atletico Madrid this summer.

Enrique convinced him of regular game time last season, as a result he rejected offers from Liverpool and Arsenal. However, he is now convinced that his fringe role at Barcelona won’t change in the new season.

Chelsea are willing to pay the €30m of the buyout clause as soon as the new Barca president is elected. In that case, Pedro could become the next big signing for chelsea in the summer.