Grand Slam Sunday has come and gone and in the end it summed up how the top four have fared this first half of the season. It also provided some hints as to what we should expect from the title sprint that is to come, answering some questions about each team’s potential for ultimate success. One of those queries was whether or not the Arsenal have a strong enough back line to keep out the more potent offenses in the league.

Heading into Emirates Stadium on Sunday, I knew Arsenal were very lucky that coming off their first defeat in some months, they were not going to have to face, arguably, the most deadly striker on the planet right now, in Didier Drogba. That being conceded, they still had to prove themselves against a resurgent Chelsea who were unbeaten in their last 16 matches. While praise for Arsenal is usually reserved for their beautiful free-flowing offense, I would like to applaud their defense which deserves all the credit for their 1-0 win against their cross-town rivals.

The atmosphere at the ground in Ashburton Grove was expectedly hostile, as anyone would anticipate at a derby of this magnitude. Add to the mix the return of a particular former Gunner (Ashley Cole) whose name inspires such venomous verbal lashings that I felt compelled to cover my wife’s ears, and you’ve got the recipe for a riotously intense 90 minutes of football. The eyes of the majority of the Gooner faithful were fixed upon their former left-back, probably hoping to pierce his soul with the intensity of their gaze and definitely to know exactly when to unleash their most ground-shaking booing. Meanwhile, I found that my eyes were fixating more and more on Arsenal’s current left-back, Gael Clichy. 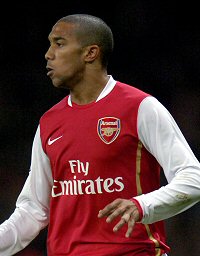 Tasked with marking Shaun Wright-Phillips out of the game, Clichy’s performance was one that made a statement that he is possibly the best left side defender in the Premier League. His most admirable skill is his positioning. I would wager that nearly 75% of the time he intercepted the ball before it arrived at its intended destination, cutting off the attack before it even had time to start. He was often successful in clearing the ball in the direction of his choosing rather than having to be satisfied with diverting it away from his opponent. The one wide open chance that Wright-Phillips completely bottled was more to do with Gallas’s poor clearance than Clichy’s defending. On the less frequent occasions that he faced his on-the-ball opponent, his tackling was terrific, frequently taking the ball off of SWP’s feet and then turning to break.

His blistering speed down the side and ability to keep the ball at his feet on a break make him an ideally well-rounded player, who can contribute to an already highly potent offense. Clichy has the ability to make incisive runs slicing through defenders with the skill of an attacker. On Sunday, he made several such runs and looked like a threat. But as is the case with many an Arsenal player, when faced with a relatively respectable open look at goal, he shies away from challenging the keeper, opting for another pass in a string of one-too-many.

Clichy is just another example of Wenger’s managerial brilliance. The 22-year old was acquired on a free transfer from AS Monaco back in 2003, the same summer as the arrival of Cesc Fabregas, and has more than filled the shoes of his predecessor who had overstayed his welcome. Cole moved on and got his cash, and Arsenal got an equally unhappy William Gallas and money in return.

Gallas is all smiles now as he has thrived in his role as team captain. He stated after the game that he felt that he did not put in his best performance, and I would agree. He was not as rock solid as you would hope your senior centre-back would be. Yet, lately he has been Wenger’s “fox-in-the-box”. His minor shortcomings in protecting his keeper from undue pressure can be forgiven when you consider the game-changing goals he has provided in the last month.

I was also in attendance when Wigan came to town with a 0-0 draw in mind. They did everything they could frustrate Arsenal’s attack, packing their half with all 11 men and time-wasting from the first blast of the referee’s whistle. And they were successful for nearly the whole match, as Arsenal’s front six could not piece together anything that resembled football. The deadlock was only broken when Bacary Sagna finally put in a decent cross and found a greatly advanced Gallas in the box, who blasted it past Chris Kirkland who had been brilliant all afternoon.

The scenario was similar against Chelsea. Avram Grant’s men looked tentative from the outset, unwilling to take any risks in exposing themselves too early in the match, advancing only a few forward during infrequent counterattacks. Thus, the first half was full of squandered Arsenal chances and hard fought midfield play. Then in the dying moments of first-half extra time, Gallas put his head to the ball again and found the back of the net. You can call it luck that this occurred on one of the rare occasions that Petr Cech misjudged a corner, but you have to give Gallas the credit for being in the right place at the right time.

If Sunday’s goalkeeping matchup was a staring contest, Gallas’s goal was Cech blinking. Not many will dispute that Petr Cech is the best keeper in the world right now and 99 out of 100 times you would expect him to deal with that corner properly, but this was a game where any mistake would be made to pay. Manuel Almunia was a big question mark for this Arsenal team when he took over for a struggling Jens Lehmann. The lasting image in my head of his previous performances prior to this season was one of then Barcelona and current Chelsea defender Juliano Belletti’s acute angle shot slipping through his legs, essentially handing them the European Cup. But since taking over, Almunia has risen to the challenge, keeping over half a dozen clean sheets on Arsenal’s way to the top.

Almunia matched Cech blow for blow, denying Chelsea the few decent looks they had at goal. He faced powerful strikes from Andriy Shevchenko, Claudio Pizarro and SWP and each time wrapped them up or parried them away with confidence. Almunia did not blink, though the pressure was high. Into final injury-time, referee Alan Wiley made the last of what I would consider several questionable calls (most notably Adebayor’s ‘foul’ on Ben Haim which called back his goal), granting a free kick to Chelsea right on the edge of the box. If there was any moment that you would expect a less than top-notch keeper to crack, this was it. Shevchenko powered a mighty shot over the wall with incredible pace, but Almunia proved he’s deserving of being the No. 1 for the Premier League’s No. 1, tipping it over the bar.

Arsenal proved with their defense that they are in it to win it. Coming off a rough month of defeats and injuries to star players, they demonstrated that they have got the mental toughness of a team beyond their years. The road is only going to get rockier, as they will lose a couple of players to the African Nations Cup, including back line rock Kolo Toure. They will need that toughness if they are to survive the grueling experience that is a Premier League season and hoist the silverware that many have been expecting of this group of Wenger kids. 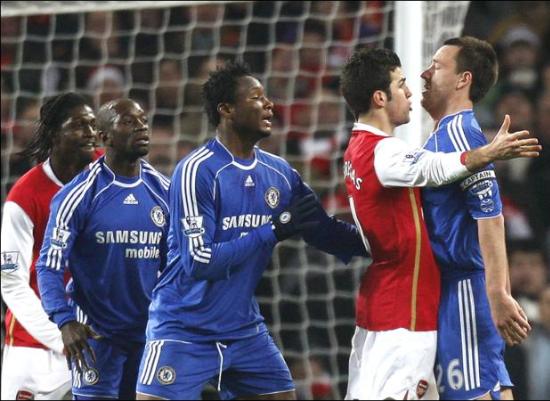