Late goals are always encouraging for any team. Manchester United under Sir Alex Ferguson made a habit of scoring late and securing point right at the death. It only shows that the team embodies a good fighting spirit, a never-say-die attitude, and they’ve the mental strength to fight till the very end. Late goal victories give huge confidence to any team.

Arsenal this season have been scoring few late goals. Yet, it has been a frustrating campaign for them so far. What should have been an easy victory against Hull City yesterday, turned out to be a frustrating 2-2 draw when both the managers expressed a similar level of rueful disappointment. 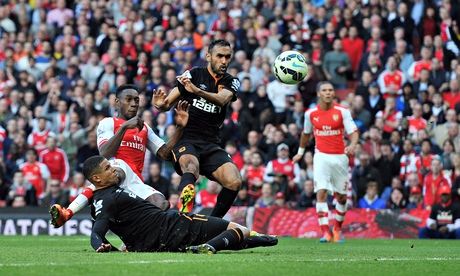 In the opening day of the season, Aaron Ramsey scored for the Gunners right at the end to give Arsenal full three points against Crystal Palace. In their second league match, Olivier Giroud scored in the 90th minute to earn a 2-2 draw against Everton. Likewise Oxlade Chamberlain scored late against Spurs and Danny Welbeck netted against Hull City to secure a draw.

It only shows that Arsenal are not bereft of any confidence at the moment. They are showing great attitude on the pitch yet they are not winning enough games, as a result lying sixth in the table, 11 points behind Chelsea.

Danny Welbeck, along with Alexis Sanchez, has been in fine form this season. He is relishing this opportunity of leading the line up front and is bubbling with confidence at the moment. At United, he was used most of the time out wide, but Wenger plays him as a central striker in absence of Giroud.

The England international has already scored eight goals so far, though only two of them have come in the Premier League.

The Gunners can hardly afford to drop points from here on, otherwise the gap with the leaders could become too big to close down within New Year. The title race could be over before it really began.