Adrien Rabiot has been angling a move away from PSG for the past few seasons. He is a highly talented midfielder, and the French champions do not want to lose such a precious talent. At the same time the club is frustrated with his unprofessional attitude at times, and their patience is running out. His next destination could be Arsenal.

The 20-year-old is not fully satisfied with his situation at PSG even if he’s progressively getting more and more playing time. Injury to Marco Verratti has given him an unexpected opportunity to impress his manager in recent games.

According to Le 10 Sport, Rabiot could have left for Arsenal this summer and a chance was presented before him to do so, but once again PSG refused to sell him despite several rendezvous between the Gunners and the player’s entourage and the Premier League club’s willingness to buy. 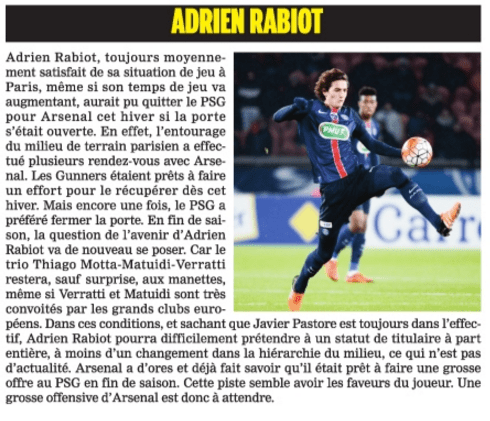 Arsenal are expected to make a move for the French youngster again in the summer. If Matuidi, Motta, Verratti and Pastore – players above him in the pecking orders – all stay and ‘block’ Rabiot’s progress, the young midfielder might press for a change of club. Arsenal have already made known that they’re willing to make a big offer for him next summer.