Arsenal defender Nacho Monreal could be heading to Spain to join Athletic Bilbao in the summer, according to reports in the Spanish media.

Monreal has stated time and again that he is happy at Arsenal and enjoying his football at the North London club, but Spanish newspaper and especially Marca, believe that the former Malaga defender ‘will’ return to Spain in the summer.

Arsenal have already started looking to find a suitable replacement, and Marca suggest the Gunners have been in negotiation with Napoli over the signing of their highly rated full back Faouzi Ghoulam. 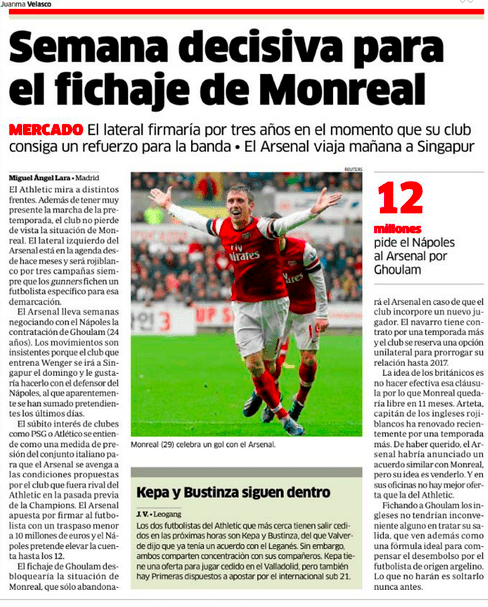 The Gunners have been in contact with Napoli for weeks to reach an agreement for the 24-year-old Algerian footballer, who is also attracting interests from PSG and Atletico.

Napoli are demanding a fee in the region of €12m, but Arsenal want to conclude the deal within €10m. Marca suggest that once Ghoulam has been signed it would allow Monreal to sign for Bilbao.

Monreal has a year left to run on his deal but there is an option to extend it for one more season. Arsenal are not considering the option of extending his contract. Only yesterday the club have agreed an contract extension for Mikel Arteta, but Monreal’s situation has not been solved yet. So as things stand, if Arsenal can sign Ghoulam, then Monreal will move to Athletic Bilbao.