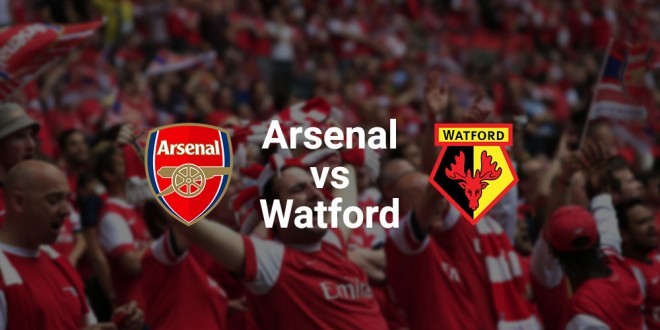 Arsenal will be looking to close the gap with Premier League leaders Chelsea when they host Watford at Emirates this week.

The Gunners are in superb form right now and will be heading into this game on the back of a 5-0 win against Southampton in the FA Cup, away from home. Arsene Wenger’s men have all the momentum and confidence needed to punish a below par Watford side.

The home side will be without the services of Cazorla, Sanogo, Akpom, Xhaka and Elneny due to injuries and suspensions.

Watford will be dreading their trip to Emirates this week.

The away side are in abysmal form right now and are without a win in their last six Premier League outings. On top of that, Watford have a disastrous head-to-head record against the Gunners.

The Hornets have lost five of their last six matches against Arsenal and will need a major slice of luck to avoid a defeat this week.

Watford will be without several first-team players for the trip to Emirates. Holebas, Amrabat, Success, Pereyra, Mariappa, Zarate and Guedioura are definitely out whereas Kabasele and Behrami are doubtful.

Arsenal are undefeated in 29 of their last 32 matches in the Premier League.

Arsenal have won 8 of their last 9 matches against Watford in all competitions.

Watford have drawn 3 and lost 3 of their last 6 matches in the Premier League.

Arsenal have scored 18 goals in their last 6 matches in all competitions.

Arsenal have an outstanding record against Watford in their last few meetings and recent form suggests that the Gunners are likely to extend that record. Get the home side to win.

Arsenal have been scoring freely over the last few weeks. Over 2.5 goals seem likely here.

Arsenal are firm favourites to win this one and should be able to get the result they want with ease.

Watford are badly out of form and will struggle to cope with Arsenal’s fluid attacking football. The away side are very poor at the back and will look to sit deep and hit the home side on the break.

The likes of Ozil and Sanchez are adept at breaking down deep defences and will certainly find a way past Watford here.