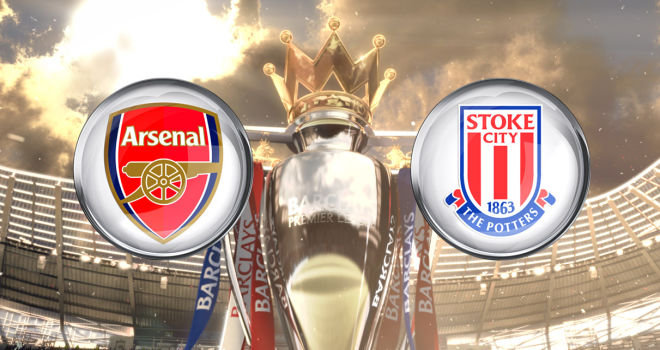 Arsenal host Stoke City in the Premier League this weekend, and the Gunners will be looking to continue their impressive run of form with another win at home.

Since their 2-0 defeat against Southampton in the League cup, they have scored nine times in two matches. Arsenal thumped West Ham and Basel in their last two games and will be aiming for something similar against the Potters, as well.

Chelsea are playing on Sunday and a big win for Arsenal will send them to the top of the table on Saturday.

Debuchy, Cazorla, Mertesacker, and Welbeck are all ruled out for the match against Stoke City. Spanish full-back Hector Bellerin is set to undergo a late fitness test.

Stoke City are having a good moment right now and will look to pull off an upset this weekend.

The Potters had an awful start to their season, but they have recovered spectacularly and are heading into this game on the back of four wins in their last six in the league.

Stoke have a very poor record against Arsenal and have failed to score against them in their last three matches. They have also lost each of the last six at the Emirates. Mark Hughes has a huge challenge ahead of him, but there is no doubt that his side are confident right now and will be up for this one.

Bardsley, Cameron, Afellay, Butland and Ireland are all ruled out due to injuries. Hughes will be delighted with the return of Arnautovic, Shawcross and Martins Indi for this one.

Arsenal have won their last 9 home matches against Stoke in all competitions.

Arsenal are undefeated in their last 13 matches in the Premier League.

Arsenal have kept a clean sheet in 5 of their last 7 home matches against Stoke in all competitions.

Arsenal have scored at least 2 goals in their last 3 home matches against Stoke in all competitions.

Arsenal have been winning at both half-time and full-time in 6 of their last 8 home matches against Stoke in all competitions. Bet on Arsenal to win both halves at 15/8.

Arsenal have kept quite a few clean sheets against Stoke. Bet on them to win to nil at 7/5.

Arsenal have been scoring freely this season. Over 2.5 goals (1/2) seem likely here.

Arsenal are far superior in terms of quality and form right now. The Gunners are in scintillating form and are likely to extend their superb record against Stoke City.

The away side are in good form, as well, and will give Arsenal a run for their money. But they are simply not tight enough at the back to contain Arsenal’s breathtaking attack at the moment.