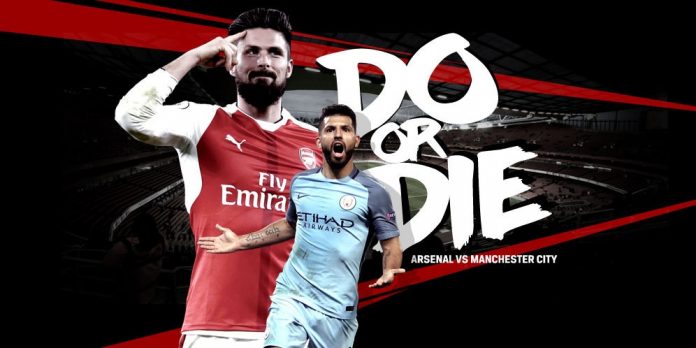 Arsenal host Manchester City in the FA Cup semi-finals this weekend and the Gunners will be looking to lift their spirits with a win here.

Wenger’s men are under a lot of pressure right now and the win over Middlesbrough ensured that a run of five straight away league defeats came to an end. Although they have done well against City in the past, this will be a quite a challenge for the North London giants.

Arsenal have been poor in the league this season and they could miss out on a top-four finish. Therefore, winning the FA Cup is now their only way of saving this season.

Cazorla, Perez, Ospina, Welbeck and Mustafi are expected to sit this one out.

Manchester City are unlikely to win the title this season and therefore they will look to win the FA Cup as their only silverware under Pep Guardiola.

They have failed to win five of their last six games against the Gunners and will be hoping to change that record this weekend. Manchester City have only won two of their last six and this match could prove to be tricky for them.

Gundogan, Gabriel Jesus and Sagna are expected to miss out this weekend.

Manchester City have kept a clean sheet in 6 of their last 8 matches in the FA Cup.

Arsenal are undefeated in 20 of their last 21 matches in the FA Cup.

Arsenal have kept a clean sheet in 5 of their last 7 matches in the FA Cup.

Arsenal have scored at least 2 goals in their last 4 matches in the FA Cup.

Manchester City are undefeated in their last 5 matches in the FA Cup.

Manchester City have been winning at both half time and full time in 6 of their last 8 matches in the FA Cup. Bet on City to win both halves.

Arsenal have been winning at both half time and full time in their last 3 matches in the FA Cup. Bet on Arsenal to win both halves.

Both teams have kept quite a few clean sheets in their last few FA Cup matches. Under 2.5 goals is an option here.

Both teams are very evenly matched and this should be a fantastic contest.

Arsenal and Manchester City are both in need of a trophy this season and neither can afford to slip up right now. It will be hard to separate the two sides but the Gunners have done well against City in the recent past and are likely to edge this once again.