Arsenal will be looking to get their 2014-15 UEFA Champions League campaign up-and-running by beating Galatasaray at the Emirates on Wednesday.

The Gunners were comfortably beaten in Dortmund in their opening group game but their Turkish opponents were held 1-1 at home by Anderlecht meaning a win in this game would more-than-likely move Arsène Wenger’s side into second position in the group.

Galatasaray aren’t expected to roll over, they do have some very good players in their team but have made an inconsistent start to the season. On paper, the Premier League side certainly have the players to get the job done.

Arsenal’s injury list continues to grow with Aaron Ramsey and Mikel Arteta both picking up injuries at the weekend. Jack Wilshere is also a doubt for this game after rolling his ankle on Saturday.

In contrast, manager Cesare Prandelli has his full squad available to him. 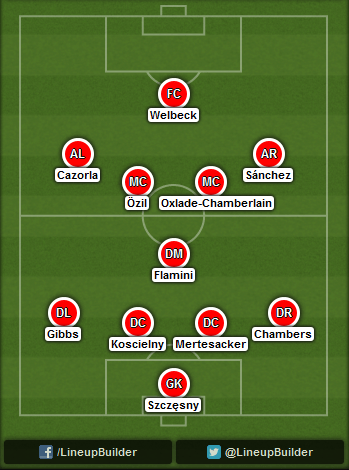 The Arsenal back four has named itself for much of this season and these are the only four experienced defenders available to Arsène Wenger due to injuries. The midfield starts to name itself too with injuries. We’ve left Jack Wilshere out so he can fully recover from the weekend’s knock ahead of facing Chelsea this weekend. Tomáš Rosický, Abou Diaby and Joel Campbell are fit options available to be named on the bench. 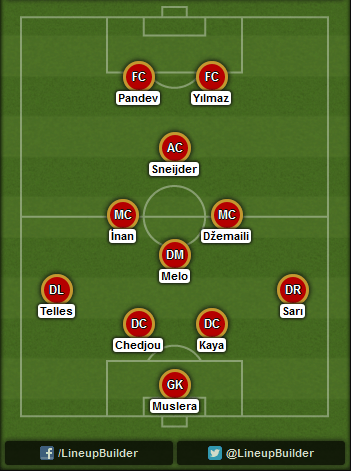 We think this is how Galatasaray will line up. They’ve got an impressive looking front three if they can click. Felipe Melo and Blerim Džemaili in midfield are prone to conceding free kicks and being cautioned. Veysel Sari likes to make a number of challenges per game also. Defensively the Turkish side have only conceded three goals in their five games domestically this season, including the Super Cup.

Alexis Sánchez vs Alex Telles
Arsenal’s big money summer signing was held back to a second half substitute appearance in the North London derby on Saturday. The Chilean surely has to start on Wednesday. He caused Beşiktaş problems down the right in the playoff tie and scored the only goal over two legs. Look for Alexis Sánchez to cause Galatasaray similar problems provided he starts.

Alex Oxlade-Chamberlain vs Felipe Melo
We’ve gone with Alexis Sánchez on the right wing and as Mesut Özil was playing on the left at the weekend we think Santi Cazorla has a good chance of starting out there and moving the German into his natural, central position. Alex Oxlade-Chamberlain can also play in the middle due to injuries. The young Englishman has looked good in cameo appearances this season and rewarded his manager with the equaliser against rivals Spurs on Saturday after being given a rare start. Play him he’ll pose a big threat to Galatasaray whose midfield also pose the risk of making card-worthy challenges. Had a left-footed effort strike the post versus Beşiktaş.

Wesley Sneijder vs Mathieu Flamini
Arsenal’s holding midfielder was at fault for another goal at the weekend, this time in the big North London derby. Arsène Wenger doesn’t have any other options in this position unless he gambles on Abou Diaby. Wesley Sneijder is a playmaker and would be expected to get the better of his French opponent in this match up. Goran Pandev hasn’t started a game for his new club yet but if he does in this one, the Macedonian forward is very clever at finding open space for one of the midfielders to pick out.

Prediction: Arsenal 2-1 Galatasaray
Arsenal haven’t thrashed anyone this season and are coming off a rival match that you’d expect to have taken something out of the players. Mikel Arteta, Aaron Ramsey and Jack Wilshere certainly picked up more than knocks in that match. Still, the Gunners are the superior team on paper and we expect them to pick up three points against the weaker opposition.