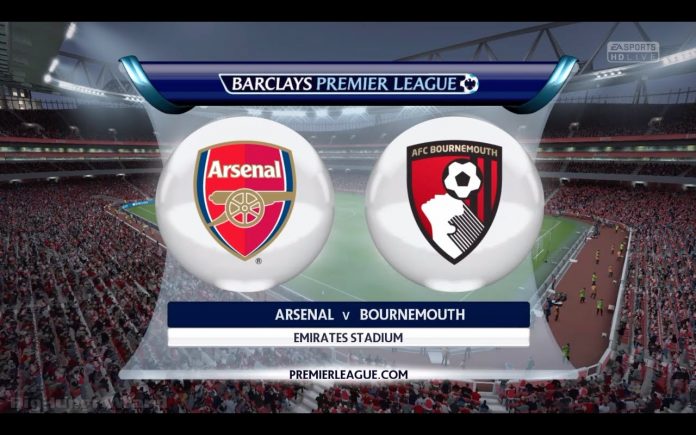 Arsenal host Bournemouth in the Premier League this weekend, and the Gunners will be looking to close the gap with league leaders Chelsea with a win in front of their own fans.

Arsenal are just three points behind the league leaders, and have a great chance of closing the gap with a win. Chelsea host Spurs, who are still unbeaten in the Premier League this season.

The Gunners were held to a 1-1 draw against PSG in their last match, and will be confident of getting back to winning ways against Bournemouth. They won both of their matches against Howe’s side last season, and will be looking to do the same this year.

The home side will be without a number of their first-team players for the visit of Bournemouth. Bellerin, Cazorla, Mertesacker, Welbeck, Akpom and Perez are all injured and won’t be back before next month.

Bournemouth have done well in the Premier League so far and are currently 10th in the table.

Eddie Howe’s men are unbeaten in four of their last six matches, and will be looking to pull off an upset against the Londoners. Bournemouth put on a fantastic defensive display in their 1-0 win over Stoke last week. They’ll need to do something similar against a top class Arsenal side.

Jordon Ibe, Artur Boruc and Surman are expected to play in this game, but Lewis Cook is still sidelined with an ankle injury.

Arsenal are undefeated in their last 11 matches in the Premier League.

Bournemouth have failed to score in their last 2 matches against Arsenal. They have also lost both games.

Arsenal have failed to win their last 3 matches in all competitions.

Arsenal are in very good form despite three consecutive draws. Get the Gunners to win at 2/5.

Arsenal have kept 2 clean sheets in their last 2 matches against the Cherries. Get them to win to nil at 6/4.

Arsenal have drawn their last 3 matches in all competitions. Get Bournemouth to win or draw at 15/8.

Arsenal are a much better side than Bournemouth, and despite their recent run of draws, they will be major favourites to win this weekend.

Arsenal have a terrific record against the Cherries as well, and will be determined to add to that by getting back to winning ways. A win home is very much on the cards here.