Two sides who made it into the last 16 of the FA Cup last weekend meet the Emirates Stadium for Premier League action on Sunday.

The Gunners are on a four game winning streak in all competitions and start the weekend one point outside the UEFA Champions League places.

Aston Villa may be progressing in the FA Cup but they are winless in their last seven Premier League matches and have not scored a single goal in their last five.

Alexis Sánchez is a doubt with a hamstring and would be a big loss to Arsène Wenger and his side who are already limited to options on the wings. Alex-Oxlade-Chamberlain, Danny Welbeck and Serge Gnabry are all injured whilst Lukas Podolski and Joel Campbell are out on loan at Internazionale and Villarreal respectively.

In the middle of the pitch, Jack Wilshere and Mikel Arteta are both ruled out. Defensively, Mathieu Debuchy is out for a while and replacement right-back Héctor Bellerín is a doubt with an ankle injury.

Fabian Delph is a doubt with an achilles problem, whilst Leandro Bacuna has a knock and Joe Cole looks set to miss out with a hamstring injury.

Striker Libor Kozák is out for over a year and is not ready to return yet. 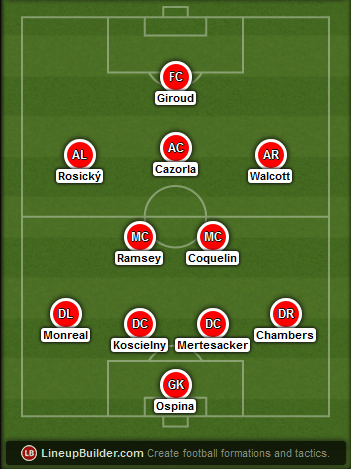 Calum Chambers appears to be the fittest option at right-back and we think Laurent Koscielny and Per Mertesacker will remain in the middle – this game has come too soon for new arrival Gabriel Paulista. Aaron Ramsey is the best bet to play alongside Francis Coquelin, whilst Tomáš Rosický can start again after a man of the match performance last weekend. Theo Walcott looks ready to start his first Premier League game in over a year. 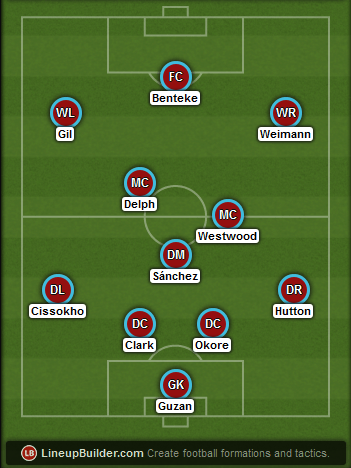 Ciaran Clark has been playing centre-back with both Ron Vlaar and Philippe Senderos both out. Aston Villa’s biggest problem has been scoring goals but new signing Carles Gil opened the scoring in the weekend’s FA Cup victory. He already looks like being Villa’s most-creative player fr the second half of the season. Paul Lambert will want his side to cause Arsenal problems on the counter-attack with this formation.

Santi Cazorla vs Cesar Sánchez
Provided Santi Cazorla starts in the middle as opposed to being moved out left to accommodate Mesut Özil, the Spaniard has been one of Arsenal’s best players of late. Aston Villa may attempt to stuff their midfield to limit the playmakers options but he’ll have support out wide from both the wingers and full-backs to stretch the pitch. Give this guy some space around the penalty area and he can play a killer ball or threaten your goal with a long-range effort.

Olivier Giroud vs Ciaran Clark
Arsenal’s striker has six goals in his 11 Premier League matches this season and has been a very good threat for them up front this season. He may be lacking the support of Alexis Sánchez in this match but still has several other players around him to create chances – Santi Cazorla, Aaron Ramsey and Mesut Özil is he plays.

Tomáš Rosický vs Aston Villa midfield
Arsenal’s experienced Czech midfielder put in a man of the match performance from center midfield at Brighton in the FA Cup last weekend. He was involved in two of three goals and could be an important factor in this game too. Whether Wenger lines him up in the left or in the middle, he’s an intelligent player with great passing ability that could be part of the side that dominate possession and territory on Sunday.

Prediction: Arsenal 2-0 Aston Villa
It’s two clean sheets in two Premier League games for David Ospina and we’re predicting that streak continues this weekend. Aston Villa have gone five league matches without a single goal. Should Alexis Sánchez not be fit it’s a massive blow to Arsenal, but they still have match winners in Santi Cazorla, Olivier Giroud and Aaron Ramsey to call upon.