Arsenal head into their fourth UEFA Champions League group game in good form over the past couple of matches.

Since late strikes from Kieran Gibbs and Lukas Podolski saw Arsenal beat Anderlecht 2-1 a fortnight ago, the Gunners have won both of their Premier League games. Including that Champions League match, Arsenal have scored seven goals since conceding.

Anderlecht made a great start to the Belgian league domestically this season but it’s just one win in their last seven in all competitions. They were already considered the weakest team in this group before a ball was kicked.

No new injuries were picked up during Arsenal’s 3-0 win over Burnley on Saturday. Theo Walcott made his return and Kieran Gibbs was passed fit pre-game. All-in-all a good day’s outing for the North London club.

A number of injuries do remain throughout Arsène Wenger’s squad however. Defenders Laurent Koscielny and Mathieu Debuchy are still out but the current back four head into this game off of back-to-back clean sheets.

In midfield, Mesut Özil, Serge Gnabry and Abou Diaby, whilst Jack Wilshere does not return to training until today so may miss out again. Wenger still have plenty of options available to him here though.

Olivier Giroud is the only striker out for Arsenal. Theo Walcott may not be ready to start on Tuesday but Danny Welbeck does have a hat-trick in this season’s competition to his name.

Steven Defour picked up a thigh injury during Saturday’s 1-1 draw with Lokeren. The Belgian side will still be without Fabrice N’Sakala too. 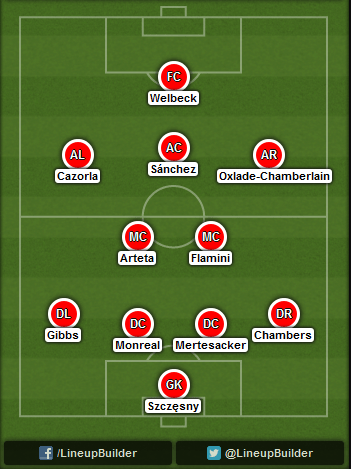 Arsène Wenger opted for two defensive midfielders against Burnley at the weekend so we don’t see why he won’t do that midweek to protect his makeshift defence. Alexis Sánchez in the middle for the past two games, scoring four goals has been a key for the Gunners so expect him to stay in that position for this one. Alex Oxlade-Chamberlain’s pace down the right wing will be a threat too. 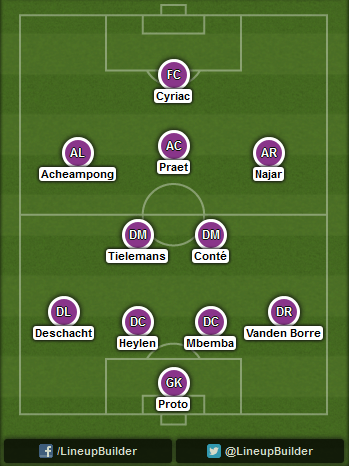 Anderlecht have played a couple of defenders at centre-back this season due to injuries but Chancel Mbemba has been a constant. Ibrahima Conté came on for the injured Steven Defour at the weekend to partner Youri Tielemans. Substitute Gohi Bi Cyriac was the hero at the weekend with a stoppage-time equaliser. The Ivory Coast striker was a surprise start a fortnight ago so we think he’ll be selected again on Tuesday. Aleksandar Mitrović and Matías Suárez are alternate choices to manager Besnik Hasi

Alexis Sánchez vs Youri Tielemans
Arsenal’s Chilean star has played in the centre for the past two games, scoring a brace in each. There’s no reason for Arsène Wenger to move Alexis Sánchez out wide, especially with both Alex Oxlade-Chamberlain and a returning Theo Walcott who can play on the right wing. Anderlecht have a 17-year old Youri Tielemans playing in front of the back four and whom won’t have the experienced Steven Defour beside him. Could be a long day for the teenager with the form Sánchez is in.

Danny Welbeck vs Olivier Deschacht
Olivier Deschacht is getting towards the end of his career, now 33. Whilst experience is on the centre-back’s side in this matchup, Danny Welbeck certainly has the advantage when it comes to pace. The Arsenal striker has yet to show any consistency but did score a hat-trick in Arsenal’s previous home game in the group stage. Not sure the Belgian side will play a high-line like Galatasaray but do expect Welbeck to see opportunities.

Dennis Praet vs Mikel Arteta
Anderlecht’s 20-year old playmaker was lively in the first meeting between these two a fortnight ago. Dennis Praet set up the home side’s opening goal that night too. He didn’t have his shooting boots on and his only competitive goal this season has been in the Champions League. A talented player scouted by bigger clubs around Europe, Mikel Arteta will be in for a tough game if the Belgian side have any decent amount of possession in the Premier League side’s half.

Prediction: Arsenal 2-0 Anderlecht
Arsenal are on a three-game winning streak and whilst they haven’t been overly impressive at all during this period you have to fancy the Premier League side to close in on progression to the second round with a victory on Tuesday. Anderlecht are on the verge of elimination already and don’t have the talent to be able to compete with Europe’s elite.