Arsenal legend Ray Parlour recently gave his view that the Gunners do not need their former skipper Cesc Fabregas, who has been repeatedly linked with a move away from Camp Nou. 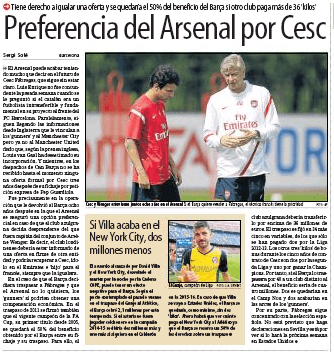 Barcelona are thought to be looking to reshuffle their squad this summer and there could be plenty of ins and outs. And one of them could be Cesc Fabregas, who came under criticism for his performances last season.

Manchester United are thought to be interested in him, but it remains to be seen whether new manager Louis van Gaal opts to make formal offers for him or not.

Mundo Deportivo says Arsenal are still in the best of position to sign their former player, although no formal offers have been received for the Spanish midfielder. When Fabregas was sold to Barcelona, there was a clause in the contract that says whenever any club puts a bid for him, Barcelona must confirm that to Arsenal, who have the right to match that offer.

In case, Arsenal do not pursue with the move, the Londoners would still get 50% of the transfer value, should any other clubs offer more than €36m for Fabregas.

Basically, the report says, because of this contractual complexities, Arsenal have the advantage of resigning Fabregas. Whether they will go for him at all is a different question.