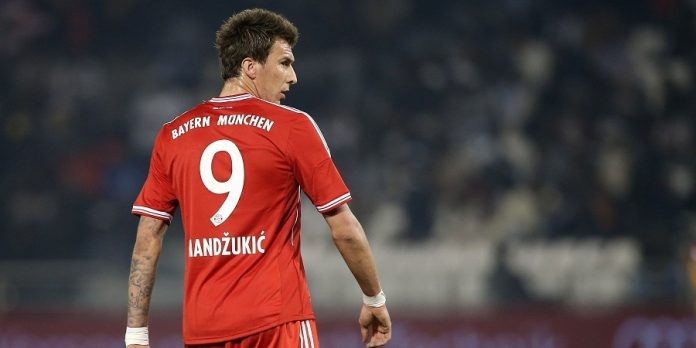 According to the Daily Mail, Juventus and Arsenal are locked in a race to sign Bayern Munich striker Mario Mandzukic, with the Gunners currently in pole position.

There has been much talk concerning the Croatian striker’s future at Bayern, with Robert Lewendowski arriving in the summer to surely lead the line next season.

Mandzukic is the Bundesliga’s top scorer, but it has been a low scoring season in the German top flight, and he was actually left on the bench until just after the hour mark in Bayern’s 1-1 draw with Manchester United this week.

The Mail claim that, despite Bayern’s wish to keep the striker at the Allianz Arena, Mandzukic should be on his way in the summer, with Arsenal looking most likely to snap up the 27-year-old.

Arsene Wenger is reported to be ready to begin a summer overhaul of his strike-force, with Olivier Giroud, Lukas Podolski and Nicklas Bendtner all linked with moves away.

The Gunners are said to be interested in a move for fellow Bundesliga front man, Josep Drmic, but the Mail insist that Madzukic is the prime target.

The Croat made a real difference on Tuesday night when he replaced Thomas Muller up top, and made the German giant’s equaliser with a clever header for Bastian Schweinsteiger to smash in.

His movement off the ball, decent link-up ability, and footballing intelligence make him an ideal frontman, and with Arsenal woefully short of viable strikers, Mandzukic could be decent option.

Considering his contract has only two years left to run, the Bayern man would cost a lot less than other top strikers in the market, something that is bound to be attractive for Wenger.

What do you think? Would Mandzukic be a good buy for the Gunners? Let me know in the comments below…