Arsene Wenger openly claimed in the media that Arsenal won’t be selling young striker Joel Campbell in the summer. That should have ended all speculations. For those Arsenal fans, who kept on reminding us this that since a manager of the club has said it, rest of the media stories are all fabricated, we have a name for you: Jose Mourinho.

The Chelsea manager claimed way back in the last week of July that the Blues had ended all the businesses and yet they signed Loic Remy on the penultimate day of the transfer window. That shows, you can hardly take manager’s words as gospels from Bible. 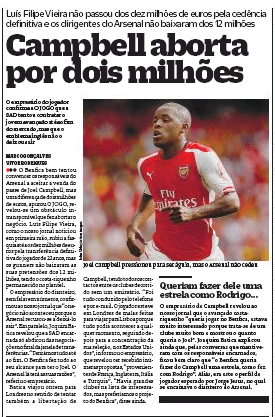 Portuguese media were confident that Arsenal could be looking to do a business for young Campbell. There were even reports from Record that Wenger would allow the striker to leave the club to join Benfica, should the Frenchman sign a top striker like Cavani.

Well, Arsenal indeed signed a striker yesterday as they sealed a late deal for Manchester United forward Danny Welbeck. However, there wasn’t any movement away from the club.

The Eagles had offered €10m for the Costa Rican striker, but Arsenal refused to sell him below €12m. Basically, they just missed out on the deal for a paltry fee of €2m.

The report claim that Campbell was ready to leave. He has had his suitcase ready as was expecting that the deal would go through. Now, as it stands Campbell will have to fight for his places at the Emirates this season.