After letting his agent do the talking all this while, Porto striker Jackson Martinez has finally given a update on his transfer situation.

Earlier this month, Martinez’s agent revealed that his client is close to a move, although he didn’t mention any particular club where his client would be heading to. AC Milan were thought to be leading the race to sign the Colombian striker, who has a reported release clause of €35m, as reports emerged that Milan vice-president Adriano Galliani would be flying to Portugal to finalise a deal with Porto.

Since then, both A Bola and O Jogo, two major Portugal newspapers have been trying to feed us that Arsenal, Manchester United and Valencia are equally interested in signing him, and all these clubs are willing to meet his asking price.

Martinez, currently with the Colombian squad, said he is currently in the mixed zone, and will decided what’s the best option for his future in coming days. 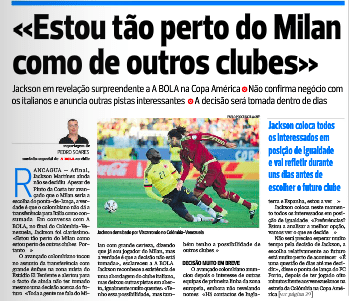 “I’m as close to Milan as to some other clubs” said Martinez. There are several offers and he’s still deciding what the best option for his future. He also says he’ll decide his future within next few days and that he has received offers from England (no mention of any particular club, we can assume it is Arsenal) and Spain. And he is considering those options as well.

Arsenal could be interested in signing him. He has scored over 90 goals in the past three seasons, and represents the right type of profile the Gunners are looking at. Porto are willing to negotiate which means Arsenal are sign him for less than his buy-out clause.