Arsenal have submitted a €30m bid for Germany’s world class central midfielder Sami Khedira in the summer, according to reports from Spain.

Khedira, who is currently on World Cup duty in Brazil, could leave Real Madrid in the summer. Spanish media believes that Madrid will be looking to cash in on the player, who has hardly played last season through injury, with the reigning European champions are reportedly targeting his national team-mate Toni Kroos to marshall the midfield. 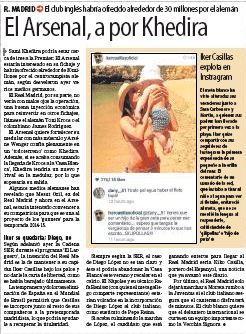 The 27-year-old has also been on Chelsea’s radar with The Mirror claiming last month that Jose Mourinho is keen to sign his former player to forge a strong midfield partnership with Cesc Fabregas, who has already joined from Barcelona.

Arsenal are in need of a quality central midfielder this summer and according to reports from Spanish newspaper Mundo Deportivo (they are citing sources from Germany), the Gunners have already submitted a €30m offer for the German international. Real Madrid would not mind getting a big cash injection for selling Khedira and then use it to go after such targets as James Rodriguez and Toni Kroos.