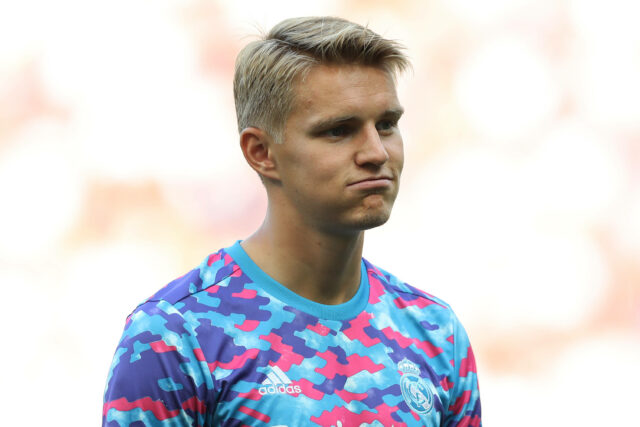 Arsenal have not given up hope of signing Martin Odegaard permanently from Real Madrid this summer.

The 22-year-old joined the Gunners on loan from Madrid during the January transfer window of 2020-21 and impressed heavily.

Madrid’s new manager Carlo Ancelotti sees him as a part of his plans, but the situation could change if Arsenal make a big-money bid.

According to journalist Rudi Galeti, the Gunners are seriously interested in signing the Norwegian international.

‼️‼️ Confirmations coming in: #Arsenal is seriously interested in #Odegaard's return 🇳🇴. The 🏴󠁧󠁢󠁥󠁮󠁧󠁿 club is ready to offer around €50M to #RealMadrid for the permanent transfer. Evolving situation. 🐓⚽️#Calciomercato #Transfers #EPL #Liga

Odegaard would only improve with consistent playing time over an entire campaign and would be a cracking signing for the club.

Arsenal want to bring in a new creative midfielder and have been linked with a move for Leicester City’s James Maddison.

Italian journalist Fabrizio Romano recently claimed that the Gunners are not close to signing Maddison, who would cost around £60-70 million.

Romano says that Odegaard remains the priority for the north London club, and it seems Arsenal are now prepared to make a formal bid,

The deal could be tricky, with Los Blancos likely to demand a buy-back clause.