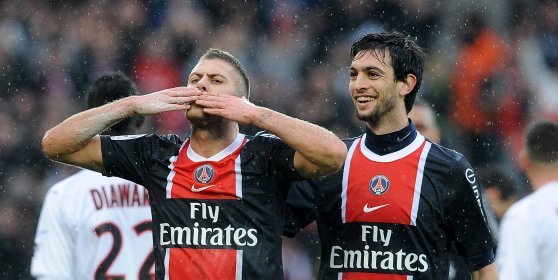 French newspaper La Parisien have suggested that Arsenal are keen on bringing Paris Saint Germain winger-cum-forward Jeremy Menez to the the Emirates and are willing to fight Juventus for his services.

Serie A giants Juventus were heavily linked with a move for the 26-year-old, but it seems they could face a tough competition from the North London club.

Menez joined PSG in 2011, but has struggled to create a big impression, and this season, he has played a peripheral role only, managing five games thus far.

The Gunners have yet to sign any player in the winter transfer window though Arsene Wenger insisted they would only go for a top quality player, available in the market. Arsenal are also linked with a move for Schalke’s Julian Draxler but it seems like a deal in January is highly unlikely.

The league leaders are in desperate need of a quality striker, but Wenger feels that the club won’t get their first choice striker targets in January, hence the focus could shifted elsewhere.

Though it is clear how much the French giants could ask for Menez, but a bid around €14m would be enough to prise him away.