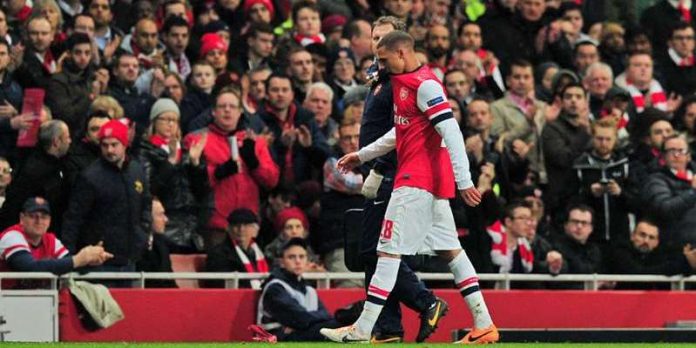 Arsenal will be without Kieran Gibbs for their crunch Champions League last 16 tie against Bayern Munich tomorrow, Arsene Wenger has revealed.

The Gunners’ boss told a packed press room of the news today, and also said that Thomas Vermaelen could start in Gibbs’ absence, with backup Nacho Monreal missing out through injury.

“We lost Gibbs (from last weekend). He has a chance to play Sunday.” said Wenger,

“Koscielny is back in the squad. Vermaelen has a chance to play at left-back.”

Having picked up a hamstring problem while on international duty, it was doubtful whether Koscielny would be risked tomorrow, with so many important league matches coming up, but with Vermaelen now likely to fill in at left-back, Arsenal may have to through the Frenchman back into the mix a little earlier than they would have liked.

Jack Wilshere misses out, as do long-term absentees Theo Walcott and Aaron Ramsey, with the latter just below first team fitness.

Despite the growing injury list, Arsene Wenger remains positive, as he told the press today,

Wenger: “It is a possible task, that is the most important thing. My team has quality and ambition.” #BAYvAFC

What do you think? Can Arsenal pull it off tomorrow? Let me know in the comments below…