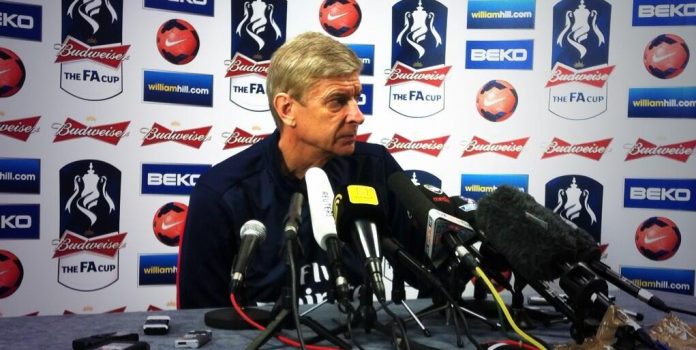 Stricken Arsenal midfielder Aaron Ramsey is set to return to action this weekend in the FA Cup semi final against Wigan, with boss Arsene Wenger delivering some much needed good news today for Gunners fans everywhere.

Ramsey has been sidelined since Boxing Day with recurring thigh problems, but made an impressive cameo appearance during the 3-0 defeat to Everton last weekend, and now Arsene Wenger is ready to unleash him on FA Cup holders Wigan, with the Gunners looking to secure their first piece of silverware since 2005.

Wenger: “We want to win the semi-final and it’s important to focus on that. We respect Wigan highly” http://t.co/FvXZOChPH3 #AFCvWAFC

The Frenchman, who is under enormous pressure following that crippling loss to Everton, also said that Mesut Ozil and Laurent Koscielny were also on the verge of returning for the club,

But it is not all plain sailing it seems for the Gunners, with three ‘players ‘uncertain’ for this weekend’s clash,

“We have a lot of uncertainties. Gibbs, Rosicky and Oxlade-Chamberlain are all doubts”

Arsenal will be desperate to end their nine year trophy drought, and Ramsey’s imminent return will be a huge boost for them, but with injury concerns a real feature of this season for the Gunners, they will be hoping for no more surprises as we enter the last few games of the season.

What do you think? can Ramsey help arsenal win the FA Cup? Let me know in the comments below…