Barcelona midfielder Alex Song has claimed that he will return to the Premier League one day, with both Manchester United and his former club Arsenal ready to pounce. 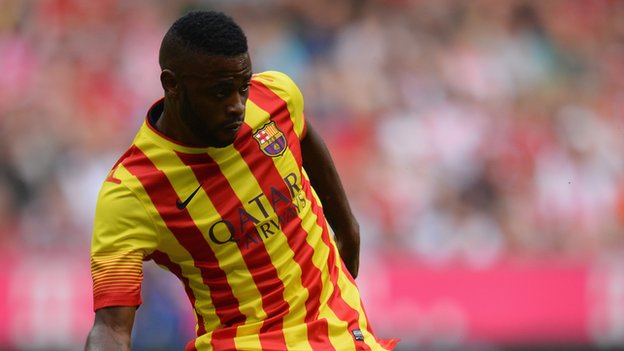 Song, who played for the Gunners between 2006-2012, has been used sparingly since his move to the Nou Camp, only making 32 league appearances so far in total.

A technically-gifted defensive midfielder, Song has great calmness on the ball, quick feet, and an excellent passing range; qualities that saw the mighty Barca swoop in for him two years ago.

Song still has a strong attachment to the Premier League, and is intent on returning one day, as he told French TV channel ‘beIN Sport’,

‘If I leave Barcelona it will be to return to the Premier League.

‘I will return to England one day, that’s for sure.’

The Cameroonian international had high praise for his former manager Arsene Wenger, which will undoubtably fuel the fire over a potential move back to North London,

The Daily Express have linked Manchester United with a move for the 26-year-old, with David Moyes set to bring in midfield reinforcement this summer, and they could be set for a battle for the midfielder’s signature, if and when he decides to leave Spain.

What do you think? Where should Song go if he decides to leave Barca? Let me know in the comments below…