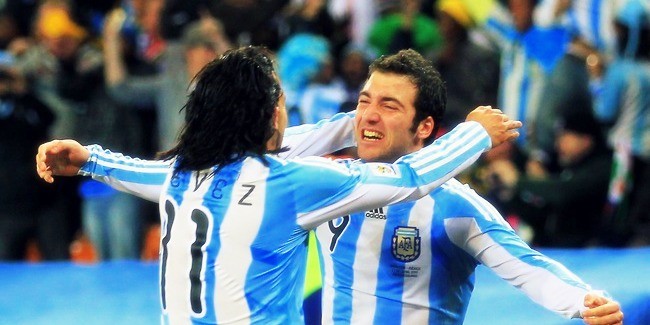 Arsenal have moved in to pole position to sign Gonzalo Higuain from Real Madrid and have tabled a club record of £22 million offer for the striker.

The 25-year-old striker, who served the Los Blancos for seven long years, clearly stated that he would be leaving the club at the end of the season.

Juventus were in negotiation with Madrid over his signature and were ready to pay up to £18.5 million for the Argentina international.

However, Madrid president Florentino Perez insisted that Higuain won’t be available for cheap and that any potential buyer will have to pay around £25 million for the striker.

Juventus are refusing to increase their bids for the Argentine and according to reports from The Evening Standard; they have switched their attentions to Manchester City’s Carlos Tevez, whose future is uncertain at the club.

The 29-year-old is entering his final year of his contract, and could be available within £10 million should new manager Manuel Pellegrini sanction his departure.

That leaves Arsenal as the only bidder in the battle to sign Gonzalo Higuain and the Gunners could force the Madrid hierarchies to reduce their demands a little bit.

It is understood that Arsene Wenger has tabled a bid of around £22 million to make Higuain the first signing of the season for the Gunners.

Daily Mail also reports that the striker has privately agreed to make the switch to the Premier League with Arsenal.

Arsenal paid £15 million to Zenit St Petersburg for Andrey Arshavin in January 2009 and till date it was their record purchase, but here the deal could easily surpass that record, which only shows how desperate the Gunners are to land a quality striker.

However, Higuain’s situation is further complicated with the managerial situation at Madrid. The La Liga outfit have yet to announce their new manager, with Carlo Ancelotti expected to take charge at some point of time, though PSG are reluctant to allow him leave until they have found any suitable replacements.