Arsenal duo Per Mertesacker and Tomas Rosicky have signed new contracts, the club has confirmed. 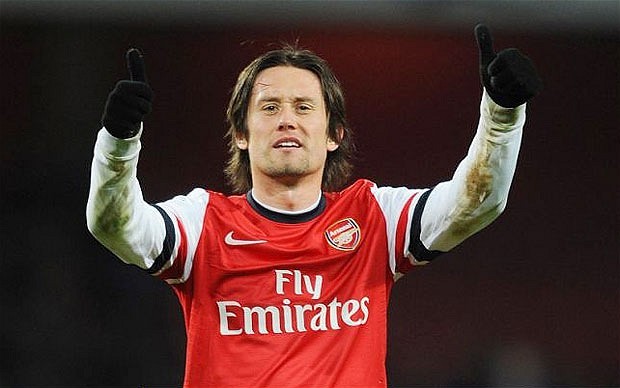 The 29-year-old German defender has been an epitome of consistency, ever since he joined from Werder Bremen in August 2011.

This season, he has been the rock at the back, forging a deadly partnership with Frenchman Koscielny. In his third season with the Gunners, he has made 110 appearances for the club and captained the side in absence of Thomas Vermaelen and Mikel Arteta.

Rosicky on the other hand is one of the senior members of this team. The 33-year-old is in his eighth season at the North London club and has made 209 appearances for the club.

“We are delighted that Mertesacker and Rosicky have committed their futures to the Club,” said Arsene Wenger.

“They are players of exceptional quality and experience, and have consistently proven themselves at the highest level. There is a great feeling of togetherness and belief in the group and this news will only help to strengthen this further.”

Rosicky’s Arsenal career has been plagued by injuries with the former Borussia Dortmund star has struggled to feature more than 30 times in any of the Premier League campaign.

The midfielder said that he is proud to be continuing at the same club after spending such a long time at Arsenal. Mertesacker has also insisted that he is deeply proud to have extended his contract at the club.