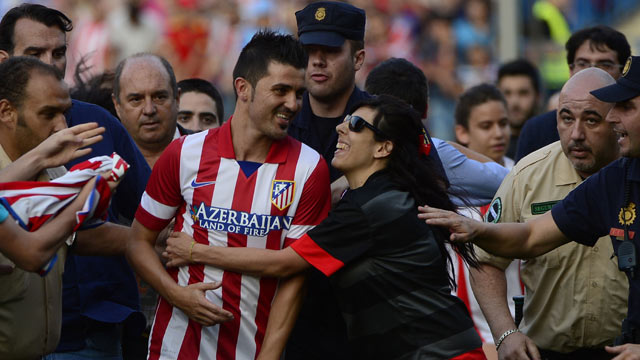 Premier League side Arsenal have been criticised throughout this summer for the lack of transfer activity. Ex-Auxerre striker Yaya Sanogo is the side’s only signing of the new season – joining the Gunners on a free transfer.

Gonzalo Higuain, Bernard, Luiz Gustavo, David Villa, and Etienne Capoue were some of the names Arsenal were linked with, only to miss out on them to other clubs.

Manager Arsenal Wenger has frequently defended his actions in the market, while stating the side were unlucky to be priced out of moves for some of their targets. However, journalist Guillem Balague has shed some light on one player who got away.

He revealed how Arsenal made an approach for Spanish international David Villa in January last season, but their enquiry was snubbed by Barcelona – who cited they had no plans to sell him. In the six months that followed, Villa’s happiness and form both took a battering, and while he had expected Arsenal to return with another offer, the Premier League side had other ideas and promptly ended their interest.

Reports suggested the 31-year old even took his kids to an English school in preparation for Arsenal.

But Athletico Madrid made a bid of €2.5M – for the first year. Potentially rising to €4.6M after three years.

With such a small transfer fee, Arsenal could have surely altered their wage structure to accommodate David Villa’s pricey salary, but clearly felt it was deemed a risk not worth taking with Villa’s advancing age – and having broken his leg 18 months prior.

For a player boasting such great honours for club and country, and while named Spain’s all-time top scorer, Villa is still a terrific player when fit. And one guaranteed to hit the back of the net regardless of who he plays for.

Have Arsenal potentially missed out on a bargain? Or were they right to steer clear of the Spaniard?