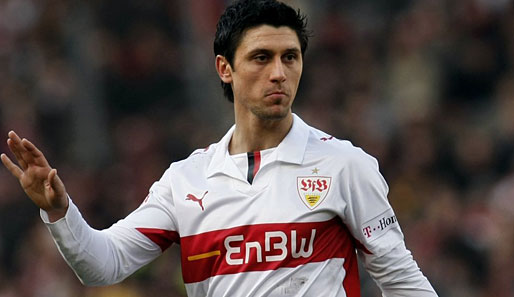 Arsenal are close to landing a striker. Yes, you’ve read it right.

The Gunners are close to landing the Romanian striker Ciprian Marica, who is close to joining the North London club, as per his agent.

Although the summer transfer window is shut, Arsenal can still land a striker, as the 27-year-old is now a free agent, following the expiry of his contract with Bundesliga outfit Schalke 04. Several top European clubs like Lazio, Shakhtar Dontesk and Inter Milan are also interested for his signature.

His agent Ioan Becali said as quoted in the Mirror:

“Marica is a really great striker who has already got experience in western European football and so it’s natural that big clubs are eyeing his career. He’s close to joining Arsenal , but we have to wait for the next week.”

Arsenal have been linked with several top strikers in the summer, with Arsene Wenger keen to bolster his attacking department. The Gunners were linked to the then-Real Madrid striker Gonzalo Higuain but the deal never materialized. Likewise, they targeted Liverpool striker Luis Suarez, but in the end had to accept defeat as the Reds closed all possible doors of selling their prized asset to a rival club.

Wenger though however surprised everyone with the purchase of one of the best attacking midfielders Mesut Ozil in the summer, for a club record transfer fee from Real Madrid. However, with Lukas Podolski, another main forward injured, the burden solely rests on the shoulder of Frenchman Olivier Giroud, and hence the need of a striker.