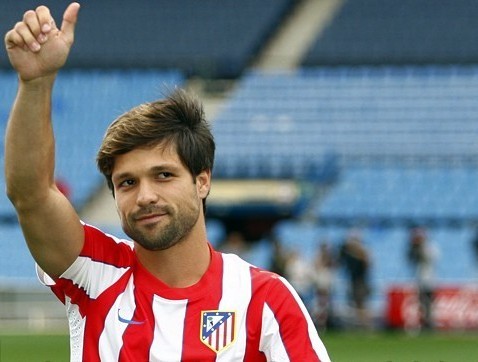 Atletico Madrid midfielder, Diego Ribas is all set to leave the club. The 29-year-old joined Atletico on a six-months loan and has proved to be an important substitute player for Diego Simeone’s side.

Despite the fact that Atletico can win both La Liga and the Champions League this season, they are still struggling with parlous financial condition. Next season, there could be a mass exodus from the squad, with European heavy weights are already planning to raid their top superstars.

Spanish newspaper AS reports that Diego’s future rests away from Vicente Calderon. His contract expires at the end of the season and will be a free agent in the summer. The player is happy at the club, but wants more game time, which at the moment seems harder to get by. Secondly, the Rojiblancos have an avalanche of attacking midfielders already and are further plotting a move for Sevilla midfielder Ivan Rakitic in the summer.

Daily Mail reported yesterday that Arsenal are one of the interested parties for Diego. The North London club was interested about him last year and is a good friend of Arsenal superstar Mesut Ozil.

Although he is not the solution to Arsenal’s on pitch problems but could prove to be a very good squad player. Plus, the Gunners can get him on free as well.