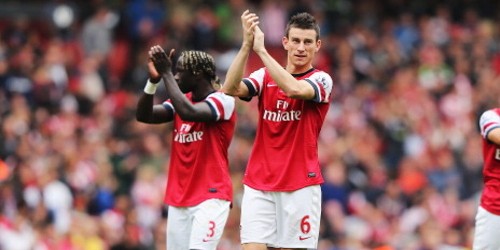 Arsenal are hoping that they can tie down star defender Laurent Koscielny to a new contract, having opened negotiations with the Frenchman on the weekend, but the saga of Bacary Sagna is trundling on, with Liverpool and Manchester City among the clubs watching proceedings with interest.

The pair have been staple parts of the Gunners’ defence for years now, and there are few better in their position in the Premier League. But both defenders have been linked with moves away in recent weeks, with Arsenal desperate to keep what is half of their first choice backline in North London for next season.

But Manchester City, according to TMW, are winning the race for Sagna, who is said to be tempted by a move to the Etihad.

The likes of Inter Milan and Napoli are also said to be looking at the 31-year-old, who’s contract is set to expire at the end of the season; but Manuel Pelligrini’s City, who already boast former Gunners Gael Clichy and Samir Nasri in their ranks, are emerging as the odds-on destination for the full-back.

His compatriot Koscielny, who is having an excellent season in the heart of the defence alongside Per Mertesacker, has reportedly caught the eye of a host of European giants such as Chelsea, Manchester United and Bayern Munich.

The 28-year-old is tied to the club until 2017, but to alleviate any fears that he may be tempted away from the Emirates, Arsenal have opened contract talks, with a view to increase his salary to £90,000-per-week.

Arsene Wenger’s side are favourites for fourth spot in the league, and lead challengers Everton by a point, with just three games to play. They beat Hull City 3-0 last time out, a dress rehearsal for the upcoming FA Cup final on May 17th.

What do you think? Should Arsenal pull out the stops in order to keep Sagna and Koscielny? Let me know in the comments below…