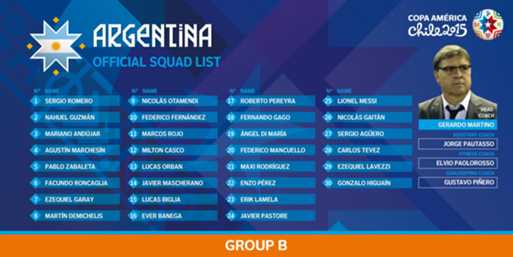 While rest of Europe will take a long summer break as the club football season draws to a close, South American footballers are gearing up for a gruelling off-season as 2015 Copa America to get underway in Chile around mid-June.

Brazil have already announced their squad for the Copa, and now Argentina have revealed their preliminary 30-man squad for the competition.

Players from four Premier League clubs – Manchester United, Manchester City, Swansea and Tottenham – have made it into the provisional squad under coach Gerardo Martino.

Manchester City’s Sergio Aguero is joined by Tottenham’s Erik Lamela while Swansea defender Federico Fernandez also make the cut. The squad will be trimmed to 23 names on or before the final deadline of June 1.

Manchester United duo Marcos Rojo and Angel di Maria have kept their places. Rojo has had a good campaign this season for the Red Devils, but Di Maria hasn’t been able to perform to the expectations and he is facing a uncertain future at the club.

La Albiceleste have been drawn in Group B, alongside defending champions Uruguay. On June 5, Argentina travel to San Juan, to face Copa America rivals Bolivia in the final warm-up friendly.