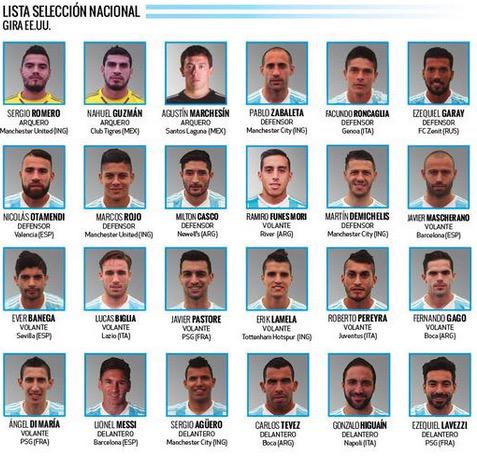 The latest Argentina squad has been announced today by coach Tata Martino, and as expected the Albiceleste squad have several Premier League based players.

Manchester United’s new signing goal keeper Sergio Romero  and defender Marcos Rojo both have been included. Rojo has yet to play for United this season since his participation in the Copa America, but Romero has been impressive for the Red Devils so far, managing two clean sheets already.

Argentina will play international friendlies in September against Mexico and Bolivia, before the start of their World Cup qualifying campaign.

Nicolas Otamendi, the Valencia defender who could move to Manchester City in the summer if the reports are to be believed, is also included, while Gonzalo Higuain, a reported target of Manchester United and Arsenal, makes the cut.

The full squad is as follows: