There are several clubs who were left on the altar, so to speak, with respect to a few big signings this summer.

Liverpool lost out on Barry, Real Madrid lost out on Ronaldo, Chelsea and United may still lose out on Robinho and Berbatov, Tottenham reportedly lost out on Villa (although to be fair they weren’t front-runners in any case) as did Barcelona (who couldn’t offload Eto’o) and Madrid (who wasted too much time on Ronaldo).

People seem to be pointing to Liverpool’s signing of Fernando Torres as proof that buying young, quality talent at the right time can help your team make the step up from wannabes to challengers. If that’s the case, why did Liverpool slip from 3rd to 4th from 06/07 to 07/08? Is it that Torres coming in masked Liverpool’s problems in other areas?

It’s easy to say that signing Huntelaar or Berbatov or Villa or Robinho will give your team that ‘edge’ that they seem to be missing, and sometimes it’s true – Berbatov played a key role in Tottenham finishing 5th in the 06/07 season. But it’s not always the answer, and sometimes building a team that can learn to play together over several years (as Arsenal and United have done, and as Ramos is doing at Tottenham) is often better.

Tottenham’s problems are often over-stated – a midfield enforcer coupled with some magic water that made them fight on the pitch all season with the same tenacity that they show Chelsea, Arsenal and Manchester United would be enough to propel them closer to their ambitions, and in that respect one hopes that Ramos has it in him to get more out of his charges than Rafa is getting out of Liverpool (who seem to suffer from a lack of motivation, or just a lack of discipline).

Bottom line – don’t kill yourself if Berbatov or Robinho or Villa or Milito doesn’t sign today – because chances are your team can reach its goals without them. 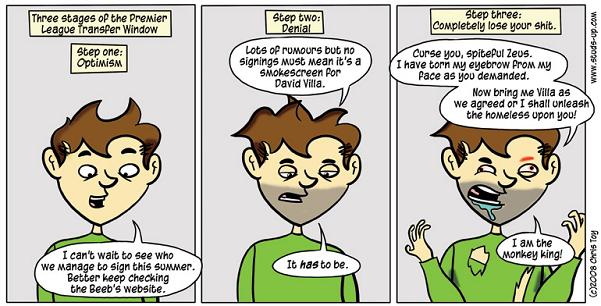